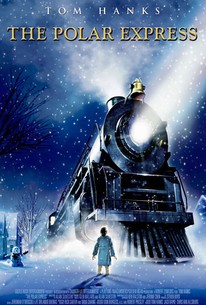 Critics Consensus: Though the movie is visually stunning overall, the animation for the human characters isn't lifelike enough, and the story is padded.

Critics Consensus: Though the movie is visually stunning overall, the animation for the human characters isn't lifelike enough, and the story is padded.

Critic Consensus: Though the movie is visually stunning overall, the animation for the human characters isn't lifelike enough, and the story is padded.

Directed by Robert Zemeckis and based on children's author Chris Van Allsburg's modern holiday classic of the same name, The Polar Express revolves around Billy (Hayden McFarland), who longs to believe in Santa Claus but finds it quite difficult to do so, what with his family's dogged insistence that all of it, from the North Pole, to the elves, to the man himself, is all just a myth. This all changes, however, on Christmas Eve, when a mysterious train visits Billy in the middle of the night, promising to take him and a group of other lucky children to the North Pole for a visit with Santa. The train's conductor (Tom Hanks) along with the other passengers help turn Billy's crisis in faith into a journey of self-discovery. A long-time fan of Van Allsburg's book, Hanks also helped produce the film. ~ Tracie Cooper, Rovi

Critic Reviews for The Polar Express

The schmaltz content gets higher and higher, as if administered through a drip feed, until by the end we are drowning in sucrose.

People in Hollywood should never work with children or animals, W.C. Fields once said. Maybe that should be expanded to hyper-realistic computer-generated children and reindeer, too.

As a spectacle, The Polar Express looks remarkable. As a film, however, it's the equivalent of an elaborately wrapped Christmas present containing a nice new pair of socks.

Tom Hanks (in a number of roles) and the other actors do a nice job of voicing their parts, but the waxy animated faces they've been given are off-putting.

At some point very early in the 3-D IMAX version of The Polar Express, technology trumps banality and you helplessly surrender to the shock and awe of this big, often thunderous movie.

Director Robert Zemeckis adds tenderness to this roller-coaster ride of a train, the thrill and adrenaline are constantly offset with unrestrained emotional punches.

But the technology was not quite up to the challenge of Mr. Zemeckis's vision.

A worthy and entertaining film. [Full Review in Spanish]

The Polar Express is reminiscent of childhood classics of yore. [Full Review in Spanish]

Polar Express has its moments, but it's not enough. [Full Review in Spanish]

There is something indescribably unworldly about this picture, and not just because of the pioneering use of motion-capture technology.

Audience Reviews for The Polar Express

Great animation, voice work, and a heartwarming story. But one needn't pay homage to the North Pole by imbuing the film with glacial pacing and completely unnecessary scenes. At times the experience was like opening presents on Christmas morning and every gift you rip open is a pair of socks.

Some fantastic animation for the time, some great performances from Sabara and Hanks, a good adaptation of the novel, and just a fun movie.

Well, I just watched this finally...almost 10 years later. I liked it a lot!! I can see that is was a new frontier of film making, and it was a little rough yet. People, apparently, were not used to seeing computer image cartoons, either. But, the storyline was wonderful, sweet, heartwarming, and it really got me into the Christmas spirit this year. Nicely done!!

"The Polar Express" offers incredible visuals and literally takes you on a roller coaster ride to the North Pole on an unforgettable journey that kids of all ages will love. Tom Hanks lends his voice to many characters for a symbolic reason that only adults will be able to understand, but for kids, the magic will still surround this film for them. This is a very fun journey that follows a kid as he believes more and more that the magic of Christmas really does exist. The dialogue is funny and heartfelt, the animation is gorgeous, and the characters are very charming to watch. I can watch this film over and over again, it just gives me a very warm feeling inside. "The Polar Express" releases my inner child every time! Even though it has a few slow moments, it's a great holiday film!