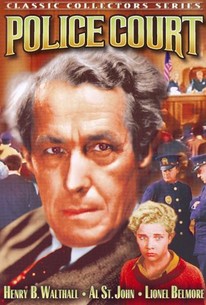 In this tragedy, a fading film star with an drinking problem finds himself hauled up on charges for public intoxication. Before the magistrate, his son makes a passionate plea to the judge. The ex-star is freed under the condition that he will never do that again. The old thespian really tries to stay sober, but faced with an increasingly hostile industry, which he had frequently abused in his heyday, that will not hire him, he quickly begins to drink again. His loyal and understanding son, also an actor, helps to get his father a bit part in his latest movie. The father is touched by his son's caring. He sobers up long enough to play a wonderful scene and then, just as the director yells "cut," drops dead from liver failure.

Henry B. Walthall
as Nat Barry

There are no critic reviews yet for Police Court. Keep checking Rotten Tomatoes for updates!

There are no featured reviews for Police Court at this time.