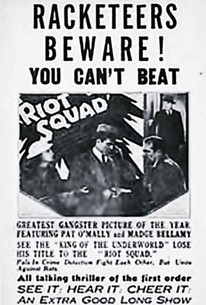 A couple of demoted cops fight over a gangster's moll in this cheap crime drama produced and directed by Harry S. Webb. A major star of the silent era now down on her luck, Madge Bellamy earned top-billing as Lil Daley, the moll assigned to lure handsome detective Bob Larkin (Pat O'Malley) to an apartment where gangster Diamond Jareck (Addison Richards) is lying in wait. Larkin, however, escapes and instead falls in love with Lil, who is being courted by detective McCue (James Flavin). The two officers' rivalry has them demoted to the riot squad, where they continue to fight over Lil. When it appears that Lil is involved in the kidnapping of a judge's daughter (Alene Carroll), Larkin denounces her. Lil is being blackmailed by Diamond, however, and the riot squad eventually frees the kidnap victim and arrests Diamond. Exonerated, Lil is free to marry Larkin. Riot Squad was released to television in the 1950s, as Police Patrol.

Kit Guard
as Pug
View All

There are no critic reviews yet for Police Patrol. Keep checking Rotten Tomatoes for updates!

There are no featured reviews for Police Patrol at this time.