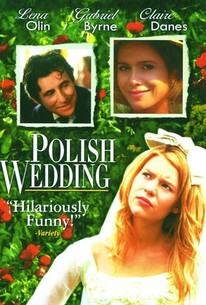 Critics Consensus: An awkward mix of drama and comedy lacks any genuine emotion.

Critics Consensus: An awkward mix of drama and comedy lacks any genuine emotion.

Critic Consensus: An awkward mix of drama and comedy lacks any genuine emotion.

Theresa Connelly makes her directorial debut with her own screenplay, a semi-autobiographical romantic comedy-drama, set in working-class Detroit, about a large Polish-American family run by matriarch Jadzia Pzoniak (Lena Olin). Her four boys obey her, but adolescent Hala (Claire Danes) is rebellious and independent. Although happily married to bakery worker Bolek (Gabriel Byrne), Jadzia engages in an almost-open affair with Roman (Rade Serbedzija). Hala sneaks off for late-night trysts with her handsome neighbor Russell Schuster (Adam Trese), resulting in her pregnancy. After her parents learn the news, Russell is forced to marry Hala, and a big Polish wedding is planned. Shown at the 1998 Sundance Film Festival.

Sheldon Alkon
as Man in Church

Joanna Woodcock
as Woman in Bakery

Sparks of Fire
as Band at Festival

Seamus McNally
as Heckler No. 2

Rachel Morrin
as Ziggy and Sofie's Baby
View All

Mixes drama and comedy into an uneasy blend that muddles the honesty of each perspective and leaves behind a messy taste.

Too many scenes float above reality!

And you wondered why they have so many Polish jokes? Here's one.

Although the film lacks the charm of the ethnic gem Moonstruck, it does justice in its own idiosyncratic way to the unpredictable course of love.

Polish Wedding an embarrassment to all concerned!

Polish Wedding often steams, but that just blurs the vision.

It didn't work for me, I got no warm and fuzzy feeling for this working-class family.

Doomed at its most basic elements.

Polish Wedding is a largely forgettable movie about a free spirited girl, Hala (Claire Danes), and her earthy, sensual mom, Jadzia (Lena Olin) and sad sack father, Bolek (Gabriel Byrne). Hala runs the streets at night, while her mom is having an affair with a guy at work, and her dad sits at home and mopes. The polish accents sounded forced, and were entirely unnecessary, but must have been meant to emphasize that these people were outsiders. This viewer found them annoying. The story followed a fairly predictable arc and the only thing that kept this viewer engaged was the radiant beauty of Ms Danes. Three stars, just for her.

Cute. Lena Olin and Claire Danes are very good in this.