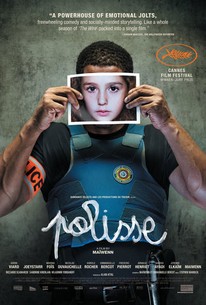 Critics Consensus: Polisse is a gripping and powerful procedural drama filled with fine acting and unflinching eye for truth and brutality.

Critics Consensus: Polisse is a gripping and powerful procedural drama filled with fine acting and unflinching eye for truth and brutality.

Critic Consensus: Polisse is a gripping and powerful procedural drama filled with fine acting and unflinching eye for truth and brutality.

Winner of the Jury Prize at the 2011 Cannes Film Festival and nominated for 13 César Awards, Polisse follows the daily lives of a tight-knit team of men and women working in the Child Protection Unit of the Parisian police. Basing her richly textured script on real child investigation cases, writer-director actor Maïwenn has gathered an accomplished ensemble cast of French actors who convey the emotional strain of the unit's work with gritty realism. They not only deal with the stress of their jobs but the inevitable fall-out in their personal lives-breakdowns, divorce and adulterous relations within the force. In between, there are frequent flashes of humor as the team attempts to diffuse daily realities. As the cases,confessions and interrogations pile up, the squad members have only each other as support as they face an uphill battle against both criminals and bureaucracy. -- (C) IFC

Whatever you think of it, you won't be neutral.

"Polisse" draws us uncomfortably close to a taboo subject then rewards us with real nourishment.

A drama with interesting moments, but also some false notes and a wildly bizarre ending.

So amorphous, volatile and multi-plotted it could be a rough cut.

It's restless and compelling, ragged and moving.

Polisse is a finely wrought piece of compelling cinema, and certainly demonstrates that in the director's chair, Maiwenn is someone to watch out for.

When Polisse sticks to its realistic fly-on-the-wall approach to the CPU it's some of the best filmmaking from this year, but its poor attempts to make the film more of a character piece hold it back from being truly great.

Despite all the best intentions, Maïwenn's CPU melodrama feels like a TV mini-series hastily re-edited for the big screen, with little or no cinematic consideration.

That emphasis on realism, in plot and portrayal, has paid off.

[Maiwenn] ets such good performances out of a huge cast that one can forgive the navel-gazing, and in a movie about a police force with management issues, she is clearly an effective manager.

Supremely and superbly character-driven, this film is a throwback to many of the best police dramas of the past.

Investing in a documentary tone with a handheld camera, this realistic drama depicts the everyday life of the policemen/women in the division of crimes against children in Paris, and is a fascinating collection of situations that show their work and the relationship between them.

Whenever something bad happens to a child in Paris, the Child Protection Unit is called in to investigate. These are their stories. (Sorry. Couldn't resist.) With the exception of a couple of music video like sequences, "Polisse" attempts to use a documentary like realism in a story that is framed by Melissa(Maiwenn, who also directed, and not at all well), a photographer, being assigned to follow the unit. Sadly, the movie is something of a mess with too many characters to adequately keep track of in showing how the frustrations of the job get to the detectives with too much emphasis away from the job. That and the movie's idea of high drama being yelling and screaming lead to only one case that truly resonates. And that's not to mention one huge cliche that had been dynamited to bits fifty years ago and one truly WTF ending.

'Polisse'. Unflinching and raw in capturing the intimacy, camaraderie and harrowing nature of a Child Protection Unit's daily lives.

"Polisse" synopsis is so dull and poor that I am glad I had not read it before watching the movie. The "journalist covering police assigned to a juvenile division that enters an affair with one of her subjects" is only part of a wider and more complex quilt of characters and interesting stories. Maïwenn brings up the dirty and dark side of Paris with the help of an excellent team of child actors - Malonn Lévana, the lovely little girl of "Tomboy" (where she plays the sister of the leading character) is someone to keep an eye on - and the best known actors of the French cinema of today: Marina Foïs, Sandrine Kiberlain, Nicolas Duvauchelle, Frédéric Pierrot, Karin Viard, Louis-Do de Lencquesaing, Alice de Lencquesaing (L'heure d'été, Le père de mes enfants), Jérémie Elkaïm (La guerre est déclarée), Karole Rocher, and others. This team of stars, however, can be a double-edged sword: at the same time it calls the attention and arouses curiosity, it can also hinder the identification with the characters and/or concentration. It was just me, perhaps, but every time a known face appeared on the screen, my mind would unplug and try to remember in which movie I had seen that actor. Despite the great cast and some memorable moments, "Polisse" is average. It looks like a police tv drama show, both in format and melodrama, but a very good one it´s true. If made for tv, all the crucial subjects raised by Maïwenn - such as pedophilia, social welfare, immigration, violence - could be better placed and developed, taking in mind the way she chose to portray them. Choices, by the way, seem to be carefully taken. Melissa ´s "ugly panties" being childlike and having the saying "spank me" that she didn´t know what means may work as an alert on how we collaborate with these sexual "fair tale" fantasies. The saying in English (spank me) may also be a criticism on our contemporary times where we usually follow global and standardized models/ideas, sometimes without really knowing or thinking about what they mean, what can be also seen, let´s say, in the episode of the "telephone teenager girl". "But it was a smartphone". Although I don't think "Polisse" is that good, Maïwenn definitely got my attention. I liked a lot her character Melissa and how it develops and grow as the story unfolds; I was delighted with the funny discussion over the changes in the French language (on how we are killing our language); and the final scene really impressed me - the ending can be melodramatic as said Peter Bradshaw, but definitely not unconvincing. That said, I will sure check Maïwenn's previous movies and will be waiting for more.