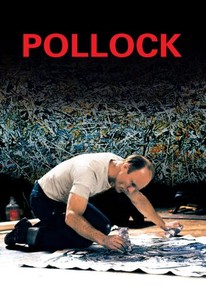 Critics Consensus: Though Pollock does not really allow audiences a glimpse of the painter as a person, it does powerfully depict the creative process. Harris throws himself into the role and turns in a compelling performance.

Critics Consensus: Though Pollock does not really allow audiences a glimpse of the painter as a person, it does powerfully depict the creative process. Harris throws himself into the role and turns in a compelling performance.

Critic Consensus: Though Pollock does not really allow audiences a glimpse of the painter as a person, it does powerfully depict the creative process. Harris throws himself into the role and turns in a compelling performance.

In August of 1949, Life Magazine ran a banner headline that begged the question: "Jackson Pollock: Is he the greatest living painter in the United States?" Already well known in the New York art world, he had become a household name--American's first "Art Star"--and his bold and radical style of painting continued to change the course of modern art. But the torments that had plagued the artist all of his life--perhaps the ones that drove him to paint in the first place, or that helped script his fiercely original art--continued to haunt him. As he struggled with self-doubt, engaging in a lonely tug-of-war between needing to express himself and wanting to shut the world out, Pollock began a downward spiral that would threaten to destroy the foundations of his marriage, the promise of his career, and his life--all on one deceptively calm and balmy summer night in 1956.

Annabelle Gurwitch
as May Rosenberg

For better and worse, Pollock is an Action Painterly picture, an ambitious work of ambiguous surfaces.

Wonderful movie, but for adults and older teens.

Harris as an actor does justice to his long-term passion to play Pollock.

It tracks a mythology of creativity which runs from Caravaggio to Patti Smith, and is running still, unended.

A highly personal, rigorous, and thoughtful analysis of a truly troubled genius.

That rare breed, a biopic that makes you want to learn more about its subject, as much as you can, as fast as you can.

a plodding glimpse of the latter part of Jackson Pollock's life

In the same way a tap dancer innately understands the percolating syncopation of all jazz music, Ed Harris identifies character rhythms and physical possibilities in drama.

Many films about artists indulge opportunities to depict people behaving recklessly. Harris seems more interested in showing us the nature of creativity.

Not a review, but an Interview with Ed Harris, who discusses Pollock among other roles.

You can decide for yourself if Pollock was a great artist. He wasn't such a great man, but at least he got a pretty good movie.

Passion can easily lead to self-indulgence, and that is certainly the unfortunate case here.

This was a real labor of love for Ed Harris, who made his directorial debut and takes the lead as the title character. What we get is a semi-standard biopic about renowned American abstract expressionist painter Jackson Pollock who revolutionized the art world in the 1940s, but was undone by his crippling mood swings, temperament, and penchant for booze...and ladies to a lesser extent. Harris is really good and quite compelling in the title role, and there's a sense of legitimacy to the scenes where he is seen painting, especially since Harris learned to paint. He's backed by a solid supporting cast including Marcia Gay Harden in an Oscar winning turn as Pollock's wife and fellow artist Lee Krasner. She pretty much walks away with the film. There's also Amy Madigan as Peggy Guggenheim, Val Kilmer as artist and friend Willem de Kooning, and a late in the game appearance by Jennifer Connelly as Pollock's mistress Ruth Kligman. The film is pretty good, but, like a lot of biopics, suffers from the fact that the subject isn't quite as fascinating as the work they make. Don't get me wrong, Pollock was a very fascinating individual, but the film really doesn't try to deeply probe into his mind, instead just barely getting under the surface a lot of the time. That's okay though, because it is somewhat enjoyable to see him freak out, get drunk, and be a tormented genius. The scenes where he's painting are well done ,and quite evocative, and I dug the music too. I also enjoyed how they tried to bring about authenticity by actually filming on the real Pollock/Krasner estate. The film is fairly by the numbers, but it does a good job at detailing the life and times of this lauded/troubled man. For a directorial debut, it's rather ambitious. Despite its faults, I still liked it, and think you should check it out.

A unique, well-directed and acted biopic concerning the troubled artist Jackson Pollock (Ed Harris), his relationship with his wife (Marcia Gay Harden), and how his internal demons cut a brilliant career short. While in some ways it is predictable, including a disturbing final act, the film contains a hypnotic quality about it thanks to an insanely possessed Harris, who is just splendid and you can tell he is very passionate about this particular person. The movie does have a tendency to drift into self-indulgence, especially in it's latter half, but Harris' portrayal remains tenacious and magnetic despite all the problems this movie possesses. We never get to go inside the head of Pollock too much, and this is definitely bothersome, but maybe that's how Harris wants it to be. The ending ends on quite a harsh, rushed note that feels forced, which detracts from one's overall impression of it. Nonetheless, one of the most underappreciated actors ever in Ed Harris is able to flex his creative prowess and go to work, and that alone earns the film a recommendation.

Flawed, but interesting biopic of Jackson Pollock. Pollock, brilliantly played by Ed Harris is an eccentric abstract painter who revolutionized the art form. His art was simple, avant-garde and revolutionary. Ed Harris delivers a great performance here, and the cast starring opposite him are great here as well. The film could have been done better, and leaves you wanting more, but for what it is, the film does a good job at showing us more of the man that made an impact on Abstract art. This is a good feature debut by actor and director Ed Harris. Harris makes the character his own, and he delivers one of his best performances. I thought that the film was well constructed and had an engaging plot. The cast deliver in their respective parts, and it's what makes Pollock a worthy Biopic to watch. Even with its flaws, this is still a good film that presents the turmoiled life of one of America's artists. Pollock may not appeal to everyone, but to those who enjoy biopics, this is a film worth checking out. The performance by Ed Harris alone makes this film worth watching. This film has a good story, good acting and good directing, what more could you want? Pollock is an entertaining two hours and it showcases Jackson Pollock's turmoil perfectly. Not a great film, but still pretty good for what it is.

"A True Portrait of Life and Art." A film about the life and career of the American painter, Jackson Pollock.

REVIEW
Ed Harris shows what a truly great talent he is, both as an actor and director. Regardless of whether your a fan of Pollock or not or whether you agree with the "disturbed" artist syndrome, this film is a tour de force in filmmaking. Excellent script fueled by gutsy performances. Marcia Gay Harden shows once again what a valuable commodity she is an actress and Ed Harris takes chance few would risk. Those are the two that should be up for Oscars and SAG awards. Great to see Jennifer Connelly, getting more gorgeous with age, and some great cameos. Hats off to Lisa Rintzler for a beautifully photographed film, on 16mm no less, that looks better then most 35mm productions. You want to see Ed Harris and Marcia Harden really act with some great material? This is it, don't miss it if your a fan of either.