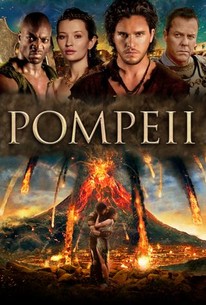 Critics Consensus: This big-budget sword-and-sandal adventure lacks the energy and storytelling heft to amount to more than a guilty pleasure.

Critics Consensus: This big-budget sword-and-sandal adventure lacks the energy and storytelling heft to amount to more than a guilty pleasure.

Critic Consensus: This big-budget sword-and-sandal adventure lacks the energy and storytelling heft to amount to more than a guilty pleasure.

Set in 79 A.D., Pompeii tells the epic story of Milo (Kit Harington), a slave turned invincible gladiator who finds himself in a race against time to save his true love Cassia (Emily Browning), the beautiful daughter of a wealthy merchant who has been unwillingly betrothed to a corrupt Roman Senator. As Mount Vesuvius erupts in a torrent of blazing lava, Milo must fight his way out of the arena in order to save his beloved as the once magnificent Pompeii crumbles around him. -- (C) Sony

Ron Kennell
as The Weasel

Pompeii 3D is a swords-and-sandals disaster epic that contains all the B-movie tropes you might hope for... The only element missing is a decent script.

It's entertainingly silly stuff with an 'oh, no - they wouldn't?' finale of the ooziest toasted cheese.

Rubbish, then, but laughable rubbish - often more "with it" than "at it".

It's all preposterously enjoyable, far more so than those impervious superheroes chucking each other about yet again.

By the time the credits started to roll I felt that bad guy Graecus was speaking directly to me when he said, "You dragged me from a perfectly good brothel for this?"

You know you have a problem when you start rooting for the mountain to win.

If you are attending this disaster movie purely for the famous natural disaster it promises to depict, you won't have too many complaints.

Basically a competent action picture that retreads to the safety of its formulas, primarily because it doesn't have the desire, much less the thought, to pursue more challenging avenues.

Let's start with the positive: the movie looks great, the visuals and effects really work. Little else does, though. The cast acts wooden, the story is predictable and boring, borrowing many elements from Gladiator and the end is cheesy as hell. Overall a real waste of time.

From a narrative point of view, this is an uninspired hodgepodge that simply recycles every cliché and convention of the genre (including an indestructible villain), being only worth it for the amusing, great-looking catastrophe, the nice score and Kit Harington's spectacular abs.

An average movie. Entertains and gives the viewer enough action for a Sunday afternoon!

The volcano ain't the only disaster vying for screen time in this block-bust of a flick. Chief among the disasters is Kiefer Sutherland, who puts on ill-fitting airs and an absurd British accent that seems to have been developed to entertain the minions at a children's garden party in North Hollywood. Kit Harington has lost any luster rubbed off from the Game of Thrones series, deadpanning his way through the muddle. The script is silly and defies probability. However, the special effects are pretty awesome with lots of hell fire and explosions to entertain the otherwise bored audience.