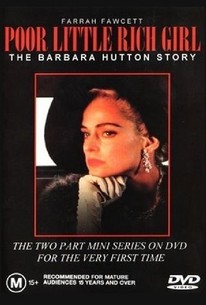 Originally shown in two parts, this massive TV movie adaptation of C. David Heymann's biography stars Farrah Fawcett as Woolworth heiress Barbara Hutton. With two failed marriages to her credit, 29-year-old Barbara marries film idol Cary Grant (James Read), the first man who loves her for herself and not her millions. This alliance goes the way of all of Barbara's romances; there will be four more marriages, the last when Ms. Hutton is 50-years-old. Shutting herself away in her Tangiers mansion, Barbara begins her long descent into the world of booze and drugs. Poor Little Rich Girl: The Barbara Hutton Story merely skims the surface of its subject's stormy life, but Farrah Fawcett's performance commands the audience's attention throughout the film's daunting 240 minutes.

Linden Ashby
as Lance (as an adult)

There are no critic reviews yet for Poor Little Rich Girl: The Barbara Hutton Story. Keep checking Rotten Tomatoes for updates!

Pretty sure this won't be everyone's cup of tea, but I for one loved it and watched for six hours straight. Yes, really! Here, Fawcett plays Barbara Hutton, the seven-times married heiress to the Woolworth fortune, and one of the richest women in America. Believe me, it's a wild ride. The acting is pretty darn hammy in places, but life stories like this fascinate me, and so I recommend! (strange that there are no other reviews on Flixster for this).