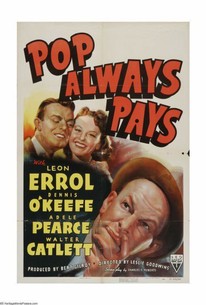 In addition to his yearly manifest of six 2-reel comedies, Leon Errol always managed to squeeze a few feature-film appearances into his RKO Radio contractual duties. In Pop Always Pays, Henry Brewster (Errol) disapproves of the romance between his daughter Edna (Adele Pearce, aka Pamela Blake) and local spendthrift Jeff Thompson (Dennis O'Keefe). He finally agrees to give his blessing to the union if Jeff is able to save $1000, whereupon Brewster will match Jeff's thousand with the same amount as a wedding present. Confident that Jeff will never be able to raise that kind of cash, Brewster is decidedly nonplussed when the boy does come up with the necessary funds-especially since Brewster doesn't have his thousand, and isn't likely to ever have it. The film really comes to life wheneve Leon Errol shares the screen with his old Ziegfeld Follies cohort Walter Catlett.

Max Wagner
as Bill - Policeman in Car 43 (uncredited)
View All

There are no critic reviews yet for Pop Always Pays. Keep checking Rotten Tomatoes for updates!

There are no featured reviews for Pop Always Pays at this time.