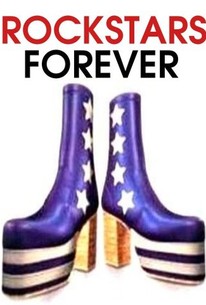 Gary Cole stars in this delightfully improbable TV movie as Jerry Harden, a conservative husband, father, and bank loan officer. Harden's well-ordered existence is turned upside down when a scruffy-looking guitarist named Izzy (David Jensen) shows up at the bank, hoping to get a loan in order to re-organize the legendary KISS-like heavy metal band Rock Toxin. When Jerry sees Izzy, his heart sinks: It looks as though his "cover" will be blown, and that the whole world (including his children) will discover that, 20 years earlier, Jerry had been "Dagger", Rock Toxin's lead singer! At first turning down Izzy's loan request, Jerry is forced to reconsider when he finds that he hasn't enough money to send his 17-year-old daughter to college. Thus, Jerry not only bankrolls the revived Rock Toxin, but he also embarks upon a hectic double life: Nerdish pillar of society by day, heavily-made-up rock singer by night. Further complicating matters is the fact that Jerry's wife Allison (Sherilyn Fenn), is the campaign manager for Helen Hunter (Shannon Eubanks), the politician wife of Jerry's boss Carl (Joe Inscoe)--and the cornerstone of Helen's campaign is her crusade against heavy-metal music! Pop Rocks debuted over the ABC Family Channel on September 10, 2004.

There are no critic reviews yet for Pop Rocks. Keep checking Rotten Tomatoes for updates!

There are no featured reviews for Pop Rocks at this time.