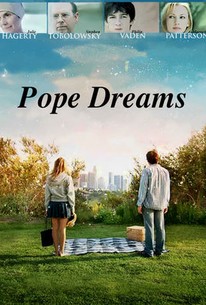 A young dreamer and directionless drummer attempts to get his terminally-ill mother an audience with the Pope while doing his best to impress his dream girl, earn a decent living by working in his father's warehouse, and navigating the unpredictable road to happiness. In a number of ways, Andy Venable is your typical nineteen year-old boy; he loves music and girls, and hopes to one day become a successful musician. But Andy's mother has been diagnosed with mesothelioma, a deadly form of cancer. She doesn't have long to live, and as a devout Catholic she has always dreamt of meeting the pope. Now, between impressing a girl who's truly out of his league and answering the calls of two Broadway producers who want to recruit him for an upcoming production, Andy will do whatever it takes to fulfill his mother's dying wish.

The set-ups seem familiar but the payoffs are fresh and honest.

There are no featured audience reviews yet. Click the link below to see what others say about Pope Dreams!