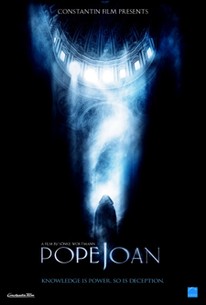 Johanna Wokalek, John Goodman, and David Wenham star in director Sönke Wortmann's adaptation of author Donna Woolfolk Cross' novel about a woman who dared to live like no other woman in history, and found herself at the center of a treacherous political conspiracy. The daughter of a 9th Century European priest, Johanna (Wokalek) defies dogmatic doctrine by learning to read and write. Later, after Johanna's secret gets out, she receives special permission to parochial school in Dorstadt. The only female in the school, she is placed in the care of Gerold (David Wenham), a brave knight with whom she falls deeply in love. But their romance is shattered when the Normans attack, prompting Johanna to assume the persona of a man and take flight to a Fulda monastery. Ordained in the practice of healing, Johanna later becomes the private doctor of Pope Sergius (Goodman) in Rome. Her fate takes an extraordinary turn, however, when Bishop Anastasius poisons Pope Sergius in an attempt to claim his title, and Johanna ascends to the throne instead. Though at first no one suspects that the new pope is in fact a female, Johanna's secret soon threatens to become known after she discovers that she is pregnant with Gerold's child. ~ Jason Buchanan, Rovi

There are no critic reviews yet for Pope Joan. Keep checking Rotten Tomatoes for updates!

When it comes to stories of the Medieval, I must admit I am limited in knowledge.So if this was real or a legend, I really don't know.Pope Joan was the story of Johanna, who grew up in Germany in the year 800 something AC, in an unfair condition for all women during that time. The movie portrayed her personality and as a legend of a woman posed as a man to enter the monastery and become Pope.German actress Johanna Wokalek was pretty good for that role and the other performances were decent as well.The portrayal of the time, crowds and the cities was below average, but very effective, since it was a low-budget movie, the image and lighting quality was not always good.The weak point of the movie was in the rhythm, which at times was uneven, and went from fast to very slow, but still it was never boring because of the strong plot. Pope Joan was a decent good historical movie and what it lacked in the visual arts, made up in strength of plot and screenplay.