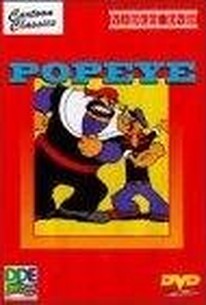 The first Popeye cartoon produced in color, Popeye the Sailor Meets Sindbad the Sailor was also the longest Fleischer production to date, and the first to be nominated for an Academy Award. In this colorful tale, Bluto plays the legendary Sindbad, introduced as the toughest and most remarkable sailor around. He lives on an island that floats on the back of a whale and that is populated by ferocious lions, deadly serpents, a two-headed giant, fiery dragons and an enormous bird, the Roc. Popeye, his pal Wimpy and the "irresistible damsel" Olive Oyl appear in the ocean near Sindbad's island. Stricken with desire for Olive, Sindbad sends the Roc to wreck Popeye's ship and to abduct the delectable damsel. Popeye, singlehandedly carrying Wimpy to safety, swims after the bird and his beloved. Once on the island, Popeye must battle with the various dangerous denizens before going one-to-one with Sindbad and proving -- with the help of a little spinach -- that no evil-doing sailor like Sindbad can get the better of him.

Critic Reviews for Popeye the Sailor Meets Sinbad the Sailor

There are no critic reviews yet for Popeye the Sailor Meets Sinbad the Sailor. Keep checking Rotten Tomatoes for updates!

Audience Reviews for Popeye the Sailor Meets Sinbad the Sailor

One of the better old Popeye cartoons. Fun from start to finish.