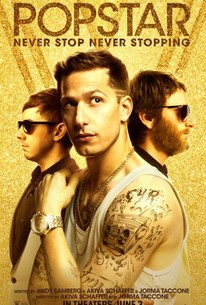 Critics Consensus: Popstar: Never Stop Never Stopping updates the rock mockumentary for the 21st century mainstream -- and hits many of its low-hanging targets with side-splitting impact.

Critics Consensus: Popstar: Never Stop Never Stopping updates the rock mockumentary for the 21st century mainstream -- and hits many of its low-hanging targets with side-splitting impact.

Critic Consensus: Popstar: Never Stop Never Stopping updates the rock mockumentary for the 21st century mainstream -- and hits many of its low-hanging targets with side-splitting impact.

Universal Pictures' Popstar: Never Stop Never Stopping is headlined by musical digital-shorts superstars Andy Samberg, Akiva Schaffer and Jorma Taccone, collectively known as The Lonely Island. The comedy goes behind the scenes as singer/rapper Conner4Real (Samberg) faces a crisis of popularity after his sophomore album flops, leaving his fans, sycophants and rivals all wondering what to do when he's no longer the dopest star of all. The latest comedy from blockbuster producer Judd Apatow (Trainwreck, Superbad, Knocked Up) co-stars Sarah Silverman, Tim Meadows and Maya Rudolph and many of the biggest names in comedy and music in cameo performances. Co-directed by Schaffer and Taccone and written by The Lonely Island trio, POPSTAR is also produced by Rodney Rothman (producer of Get Him to the Greek, Forgetting Sarah Marshall; co-writer of 22 Jump Street), as well as Samberg, Schaffer and Taccone.

Ahmir 'Questlove' Thompson
as Himself

Carrie Underwood
as Herself

Usher Raymond
as Himself

Ringo Starr
as Himself

Simon Cowell
as Himself

Mariah Carey
as Herself

Adam Levine
as Himself

DJ Khaled
as Himself

ASAP Rocky
as Himself

Mario López
as Himself

Will Arnett
as Main CMZ Reporter

Danger Mouse
as Himself

Pharrell Williams
as Himself

Jimmy Fallon
as Himself

Win Butler
as Himself

Régine Chassagne
as Herself

Steve Higgins
as Himself

Martin Sheen
as Himself

Will Forte
as Bagpipe Player

Michael Bolton
as Himself

Damon Bryson
as The Roots

Kirk Douglas (V)
as The Roots

James Poyser
as The Roots

James Poyser
as The Roots

Mark Kelley
as The Roots

Ian Hendrickson-Smith
as The Roots

Tariq Trotter
as The Roots

Frank Walker
as The Roots

The hero and his support rockers, Jorma Taccone and Akiva Schaffer, who co-directed and with Samberg co-wrote the script, are amiable, antic and tuneful.

It's not as funny as Spinal Tap (which film is?), but there are still a fistful of laugh-out-loud moments.

You probably need to spend more time than I do on sites such as TMZ to get all the jokes, but the film nails the oversharing banality of YouTube celebrity.

Popstar, though, is a mockumentary put together with such brio that you hardly notice that most of its gags are very obvious.

This comedy's not exactly groundbreaking, and all the celeb cameos are a bit of a comedy humblebrag, but there are some reasonably sized laughs here ...

Samberg and his posse ... have a good ear for contemporary pop and deliver one or two crackers that, if heard fleetingly, could pass as genuine hits.

It's all surface ... but there are much worse ways to spend 86 minutes.

Popstar is one of the films that arises from sharp minds with sketch comedy backgrounds, overflowing with ideas. TLI found the right pace for such an endeavor, and gave us one of the best comedies of the year.

Extreme repetition gets laughs the first time around, while bursts of graphic nudity hope to stupefy viewers into forgetting the lulls that plague the middle of the picture.

Skewers celebrity without attacking the celebrities themselves.

Handing Lonely Island $20 million and unleashing them onto the pop music landscape is a no-miss proposition.

This Is Spinal Tap was able to turn the knob up to 11 -- with Popstar, 4 on the dial is the best one can reasonably expect.

Popstar: Never Stop Never Stopping takes the genre of a rockumentary to a different level. The film's outlandish gags and humor along with its sleek and constructed direction is a surprisingly effective and hilarious parody on the music and entertainment industry that only the Lonely Island & Judd Apatow could spice up. 4/5

Perhaps for someone who is more engrained in the pop culture of the day, this would be a success. It's not that I didn't understand the references, it's just that I didn't care.

Of all the films to spoof reality throughout the years, Poster: Never Stop Never Stopping stands above the rest for one very specific reason; It feels fresh. Playing out as a Mocumentary to start and evolving into a straight up narrative film at times, the uniqueness of this film delivers in spades. Taking elements from films like Michael Jackson's This Is It, or Justin Beiber's Never Say Never, this film exploits the music industry for what it truly is, all while telling a surprisingly compelling story about its main protagonist, Connor (Andy Samberg). While Poster: Never Stop Never Stopping will not be remembered as one of my favourite films of the year, it is certainly one of the biggest surprises. Ever since their hilarious music videos became a huge success on Saturday Night Live, Andy Samberg, Jorma Taccone, and Akiva Schaffer, along with the rest of the Lonely Island crew, have continued to please fans to this day. Although they probably do not have the fan base to bring people out the theatre (as seen by their very disappointing 10 million dollar domestic gross), it is without question that they put in 110% of their effort into making a very funny film with just enough heart teetering on the edge of cheesy. The Lonely Island crew is what truly made this film what it is. Sure, all of these actors are funny and the film has some pretty awesome cameos, but just how funny is it? A great comedy is based on the set up and payoff, and I have to say that everything they set up throughout this film is paid off in the climax. Delving into the downward spiral of an artists low point, while still being hilariously true-to-life with the jokes and references, Poster: Never Stop Never Stopping is a much smarter and more caring film than one might think. I was laughing pretty hard throughout and the chemistry between these three actors is electric on-screen. I had an absolute blast watching their banter, and once the film delivered its endless amount of cameos, I had a giant smile on my face. Although I loved watching this film, it is not all sunshine and rainbows. At a mere 87 minutes, you'd think that a film such as this would fly by fairly quickly, but having the style that it does (mostly interviews, cameos, and flashbacks), it does suffer a bit from the let's-get-moving syndrome. I felt myself laughing, while still wishing the film would move at a quicker pace, but that may just be a personal flaw that I have. It is a very, very short picture, so if you are able to accept a bit of downtime throughout, you may just end up living every second of this film, if you already enjoy this type of comedy. In the end, this is a difficult comedy to recommend, due to the fact that its comedy is definite subjective. If you weren't ever a fan of Saturday Night Live when these actors were present, you may not find this film all that funny. On the other hand, there is enough of a compelling story to keep average moviegoers engaged in it, so it does benefit from that. For myself, I do enjoy these actors and everyone who cameos throughout, so I will always give this film a glowing recommendation. I laughed pretty hard throughout and was compelled by the transformation of its lead character. Poster: Never Stop Never Stopping will not win any awards, but it is a very, very good comedy nonetheless.

THIS IS SPINAL POP - My Review of POPSTAR: NEVER STOP NEVER STOPPING (3 Stars) One's enjoyment of POPSTAR: NEVER STOP NEVER STOPPING, the feature length mockumentary from the famed SNL Lonely Island trio (Andy Samberg, Akiva Schaffer and Jorma Taccone) depends on your experience with BEHIND THE MUSIC-style exposes or such promotional features as those starring such recent pop icons as Justin Bieber and the Jonas Brothers. If you're not keyed into that element of pop culture you may find POPSTAR to be an exasperating experience. For me, I went into with THIS IS SPINAL TAP memories in my head and had a great time, despite the fact that the film doesn't quite reach such heights as the granddaddy of them all. Our trio, who star and co-wrote the script, with Schaffer and Taccone directing, play members of a once-popular boy band whose lead singer Conner4Real (Samberg) splits from the group to launch a successful solo career. The action picks up with Conner launching a tour to support his flop of a second album. Will he choose his solo career over his friendship with his former band mates? That's about the extent of the conflict in this film. It's very simple and the targets are easy, yet the beauty is in the details. Every scene in which they skewer TMZ, with Will Arnett hilariously leading his lounging crew in a surreal display of over-emoting, perfectly achieves the level of satire intended. Chris Redd perfectly embodies his role as the rising star who joins the tour and sabotages Conner's career. A certain A-list superstar nearly steals the film as the too eager tour chef with some not-so-hidden talents. I loved how Taccone is coerced into wearing a Daft Punk-style helmet over his head to hammer home how irrelevant he is to Conner's band or how as his DJ, he doesn't need anything more than an old iPOD to do his job. The real highlights, however, are the musical numbers. Any fans of SNL's "D*ck In A Box" song will find plenty of laughs in the indelible "Equal Rights" number in which Samberg extols the virtues of same-sex marriage while simultaneously assuring his audience that he's not gay himself. "Finest Girl (Bin Laden Song)" may be the first tune to compare sexual intercourse with a sausage-skirt-sporting woman to the killing of one of the world's most famous terrorists. Not every joke lands, but enough do to make this a more than adequate sketch comedy. Its heart slyly sneaks up on you to reveal a film about true friendship. But don't worry, the silly gags, the jabs at entitled pop stars, the misbehaving, the gross expenditure, and the hashtag-centric way of speaking stay front and center throughout this charming yet forgettable comedy.