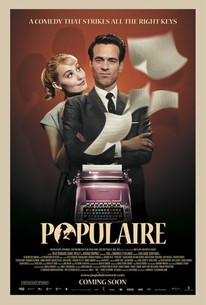 Spring, 1958: 21-year-old Rose Pamphyle lives with her grouchy widower father who runs the village store. Engaged to the son of the local mechanic, she seems destined for the quiet, drudgery-filled life of a housewife. But that's not the life Rose longs for. When she travels to Lisieux in Normandy, where charismatic insurance agency boss Louis Echard is advertising for a secretary, the ensuing interview is a disaster. But Rose reveals a special gift - she can type at extraordinary speed. Unwittingly, the young woman awakens the dormant sports fan in Louis. If she wants the job she'll have to compete in a speed typing competition. Whatever sacrifices Rose must make to reach the top, Louis declares himself her trainer. He'll turn her into the fastest girl not only in the country, but in the world! But a love of sport doesn't always mix well with love itself. -- (C) Weinstein

It's neatly formatted, but if there's a message in the margins of this manuscript, "Populaire" doesn't spell it out.

As romantic comedy it's uneven, but as an ode to something long gone, "Populaire" hits the right notes.

Even when there's tragedy around the turn, it doesn't matter. Populaire plays like a musical - you expect anyone, at any time, to break into song.

[Populaire] does run through the expected paces with admirable style, with a glossy, Technicolor production design that sometimes makes it seem it might have been made in the '50s, not just set there.

Roinsard, who wrote his feature debut with Daniel Presley and Romain Compingt, is unabashedly in love with cheesy, cornball sentiment, which he dusts off and polishes to a fair-thee-well.

Is this remake really necessary? Maybe not, but to worry about that is to risk missing out on a lot of fun.

Despite a painful lack of narrative originality, Populaire's peppy charm, game cast, and spectacular bubblegum imagery save the day and make it fun, at least.

Nothing quite goes according to plan in a film that is too long and needs a funnier script but is partially rescued by the screen charm of Duris and François.

It takes a while to get going and the constant clack, clack, clacking can start to grate but Populaire is a warm and stylish film with plenty of polished charm.

A clever movie of considerable wit and charm. Its only fault is that it could have been a bit shorter and benefitted from the trim. Still, it's time well spent.

There is really no film to compare it to.

After all those words pounded onto the typewriter, this throwback finds a way to capture the big L in any language.

There's so much to love about this French romantic comedy that centers on the world of speed tying in the late fifties. As a period piece, this film was produced convincingly. The costumes are authentic, the sets are bright and brilliant, and the attitudes are pure Parisian metropolitan. The subject matter of speed typing was engrossing and was handled splendidly, rising in tension from one scene to the next. The training sessions were interesting, the inner personal relationships were also, and the love story, though mishandled at times, was an adorable adage to the rest of the plot. The competition was so fierce and unbridled that it almost made me uncomfortable, and for some reason the stakes were quite high, even though our main character Rose (Francois) didn't even initially want to compete. This film fuses all the best aspects of the fifties aesthetic with the vintage idyllic themes of a classic love story. It feels quite authentic, and it's beautiful to boot, making it a traditional and yet contemporary film.

This movie, while good, didn't really click for me. The visual style, and presentation, is certainly very charming, but the film's script is very uneven. It's clear that the film is a tribute to old 50s movies, like something Audrey Hepburn would appear in. It's basically a tribute to a time in film that's long gone, and the movie pulls it off very well I thought. The film, other than the fact that it's in color, looks like it could've come straight out of the 50s. The problem is that in concentrating so much of the film on how everything looks and how it sounds, the set design, the costume design, and trying to make sure it feels like it could've come from the 50s, they forgot that they actually had to make the movie, the story, and its characters interesting. The leads are quite good, Deborah Francois has that old Hollywood starlet feel. She's definitely no Audrey Hepburn, but she has that same type of likable charm and presence, and that's exactly what the film needed. She's certainly the highlight of the film. Romain Duris is fine too, but I found his character to be a little uninteresting, especially when compared to Deborah. He's certainly good, but I wasn't a big fan of how his character was handled. The movie lacks substance, it never really feels like these two are falling in love. It really is concentrated in style of substance and actual character development, and that's the film's biggest downfall. Your film can have the best set design, the costume design, the best score...but if your story isn't interesting then all that, while it's not unimportant, is wasted. You went through all that work trying to make the film look and film genuine, that you forgot the most important part of the film, the part that matters most in the long run, and that's the story and the characters. And I don't mean to say the film's bad, as implied by the score I gave it, the cast is solid and the film is, visually, very charming. It just should've been much better considering how much work went into everything else. Maybe it's just me, but I wasn't into this movie that much. It wasn't exactly an interesting story or an heartwarming love story, it's still a perfectly solid movie.

A delightful and sweet film which oozes aroma of cinema how it used to be in the 50s and 60s: innocent and breezy bringing a sense of nostalgia to those who are 40+. It could have been a real gem if Romain Duris did not have the charm of a plasterboard.

Rose (Francois) is an awkward but pretty girl living with her widowed father in a small Northern French town in 1958. When she applies for a position as secretary to handsome local insurance man Louis (Duris), her impressive typing speed gets her the job. Once in the position, Louis discovers Rose is a disaster, thanks to her clumsiness. Her one skill, that of typing at an incredibly rapid pace, intrigues Louis however, who insists she enter a local speed-typing competition. When she succeeds at this, Louis devises a rigorous training schedule for Rose, with the aim of entering the national championships. The idea of taking an obscure sporting or competitive event as the backdrop for a comedy has been milked to death in recent comedies. We've seen figure-skating in 'Blades of Glory', ping-pong in 'Balls of Fury', and dodgeball in, well, 'Dodgeball'. None of those movies worked for one very simple reason; they revolved around one joke and died stretching it out to feature length. With this knowledge, I expected little from Roinsard's debut feature. Thankfully, he's used the concept of speed-typing as no more than a "MacGuffin". It's simply the backdrop to what is, essentially, a homage to the technicolor world of fifties Hollywood. France never had this sort of cinema back then and there's a sense that Roinsard is trying to rectify this. The film is awash with references to that golden age of entertainment, from the primary colors of MGM musicals to a Saul Bass influenced credit sequence. There's even a 'Vertigo' homage which, unlike last year's 'The Artist', pays respect in the correct manner. Duris and Francois are playing the sort of roles Rock Hudson and Doris Day would have taken over half a century ago. Due to its fifties setting, accusations of male chauvinism may be leveled but, thankfully, Roinsard makes no concessions to modern sensibilities, (unlike Spielberg's 'Lincoln'). His film bears no resemblance to reality, instead it's set in the world of the cinema. In real-life, Normandy is a drab, grey region, lacking the brightness and color on display here. This is what movies of this nature do, they transport you from the humdrum of reality into a world where something as simple as a room of frantically typing secretaries can explode with the energy of a Busby Berkeley dance number. In French, the word "entertainment" literally translates as "diversion" and, as diversions go, 'Populaire' is one this year's best. C'est le divertissement!