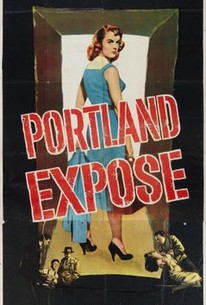 Virtually every major city in the 1950s harbored some sort of political corruption or other, providing plenty of material for the "exposé" school of filmmaking. Portland Expose is a fact-based account of skullduggery in the Oregon metropolis. Inspired by revelations made during the Senate's McClellan Committee hearings, the story concentrates on an honest tavern owner named George Madison (Edward Binns) who is involuntarily sucked into the city's rotten-to-the-core political machine. When Madison refuses to allow his establishment to serve as the gathering place for hoods and delinquents, the powers-that-be threaten to harm his family. Only after his daughter is attacked by a syndicate flunkey does Madison decide to fight back. At great personal risk, he manages to tape-record damning evidence against Portland's "untouchable" criminal kingpin (Russ Conway). The supporting cast includes such radio and TV "regulars" as Virginia Gregg, Larry Dobkin, Frank Gorshin and Joe Flynn.

There are no critic reviews yet for Portland Expose. Keep checking Rotten Tomatoes for updates!

This is from the forgotten film noir collection, What that means I'm not sure, maybe movies very few people will watch then (1957) or now. Either way its a pretty good old black and white movie about the mob moving into Portland, OR in the fifties and putting the squeeze on taverns and their pin ball machines. You heard me right collecting 50 - 50 off of the take on pin ball machines/ And this was before pinball machines had flippers and only cost a dime. only one I recognized in the movie was Frank Goshin who used to play the riddler on the Batman series. Still it was enjoyable for a Black & White and was the 1st part in a double feature, second film to be reviewed later. This one 3 1/2 stars.