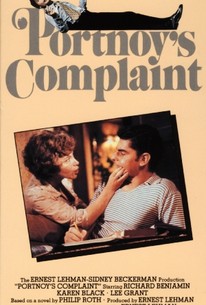 A classic novel does not always a classic movie make as can be seen in this filmization of Phillip Roth's controversial, profane, and at times hilarious best-seller. Set in an analysts' office, the story reflects the stream-of-consciousness whining and self-flagellation of Alexander Portnoy, a neurotic, self-absorbed Jewish man with some serious sexual hang-ups, as he tries to sort through his childhood agonies, his somewhat bizarre relationship with his overbearing mother and milquetoast father, Judaism vs. Christianity and his unhealthy relationships with his own body and gentile women, particularly the girl he calls "The Monkey."

Jessica Rains
as Girl In Office

The other thing lacking in the movie is the book's sense of mischievous fun and the kind of joy contained in Roth's liberating message.

There are no featured reviews for Portnoy's Complaint at this time.