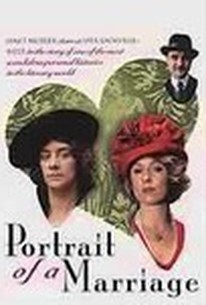 Adapted from the autobiographical novel by Nigel Nicolson, the four-part British miniseries Portrait of a Marriage was inspired by the marriage of convenience between Nicolson's parents, historian Harold Nicolson and novelist Vita Sackville-West (Janet McTeer). Although the elder Nicolson was homosexual, his wife Vita was not only forgiving, but also obliging when he strayed from home and hearth to pursue partners of his own gender. After all, Vita was herself embroiled in a torrid -- and ultimately tragic -- affair with one Violet Keppel (Cathryn Harrison). The winner of a BAFTA award for Best Costume Design (Dinah Collin), Portrait of a Marriage was telecast in Britain and New Zealand in 1990, and in the United States two years later. ~ Hal Erickson, Rovi

Critic Reviews for Portrait of a Marriage

Visually and dramatically Marriage is terrif, with Dinah Collins's costumes and designer Stuart Walker's contributions top of the line in establishing the period piece's English and continental look and feel.

There are no featured reviews for Portrait of a Marriage at this time.

Portrait of a Marriage Quotes