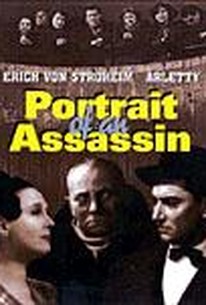 Three powerhouse European screen personalities--Pierre Brasseur, Erich Von Stroheim, Maria Montez---elevate the tawdry melodramatics of Le Portrait d'Un Assassin. Brasseur plays Fabius, a reckless motorcycle driver, currently working in a carnival. When he begins to "choke up" in front of the crowd, Fabius decides it would be best to quit his job and leave for parts unknown. But first he must rid himself of his nagging wife. Attempting to kill his missus, he accidentally wounds carnival owner Catherine (Maria Montez). Fabius decides to continue risking his life when he falls for Catherine, who is "turned on" only by men in dangerous professions. Von Stroheim plays Eric, one of Catherine's ex-lovers, now hopelessly paralyzed. His tendency to "ham" confined by a body brace, Von Stroheim delivers one of his most effective performances. According to contemporary reports, Le Portrait d'Un Assassin was to have been directed by Orson Welles, who presumably would have also played the Pierre Brasseur role (though it would have been fun to see him in the Erich Von Stroheim part--or, for that matter, to watch him try to direct Von Stroheim). ~ Hal Erickson, Rovi

Critic Reviews for Portrait of an Assassin

There are no critic reviews yet for Portrait of an Assassin. Keep checking Rotten Tomatoes for updates!

There are no featured reviews for Portrait of an Assassin at this time.

Portrait of an Assassin Quotes