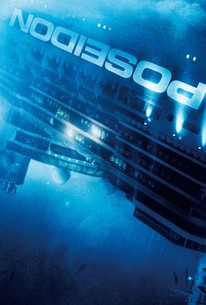 Critics Consensus: This remake of The Poseidon Adventure delivers dazzling special effects. Unfortunately, it doesn't seem that any of the budget was left over to devote to the script.

Critics Consensus: This remake of The Poseidon Adventure delivers dazzling special effects. Unfortunately, it doesn't seem that any of the budget was left over to devote to the script.

Critic Consensus: This remake of The Poseidon Adventure delivers dazzling special effects. Unfortunately, it doesn't seem that any of the budget was left over to devote to the script.

Set adrift in the vast waters of the North Atlantic for a luxury New Year's Eve party staged in the ship's magnificent ballroom, the massive ocean-liner Poseidon receives an unexpected jolt when a rogue, 100-foot wave rolls it completely upside down, forcing the surviving passengers to fight their way to safety in Das Boot director Wolfgang Petersen's waterlogged blockbuster. Trapped beneath the waterline and implored by the captain to remain in place until a rescue team arrives, the panicked survivors struggle to keep their cool as the water begins to rush in, infernos blaze all around, and a loss of electricity plunges the doomed vessel into total darkness. Seasoned gambler Dylan Johns (Josh Lucas) isn't willing to wage his life on the prompt arrival of help, though, and as he attempts to navigate the treacherous, inverted maze of death, he is flanked by desperate band of like-minded seafarers including eight-year-old Conor (Jimmy Bennett) and his mother, Maggie (Jacinda Barrett), reticent stowaway Elena (Mía Maestro), suicidal Richard (Richard Dreyfus), and concerned father Robert (Kurt Russell), whose missing daughter may still be somewhere onboard along with her frightened fiancé. With a little luck and a little help from onboard waiter Marco (Freddy Rodriguez), the desperate team may just live to see the morning after.

Valerie Azlynn
as Passenger No. 1

Carrie Frymer
as Passenger No. 2

Beverly Overstreet
as Passenger No. 3

Vincent De Paul
as Passenger No. 4

It swims but it's one of those sloppy dog paddles your kid brother does more than an Olympic freestyle.

Petersen's expert direction ensures it remains gripping, keeping the tension ratcheted right up and commendably steering it all home within 100 minutes.

Poseidon betrays a studio mindset that can only hasten the current erosion of movie attendance -- skimping on human content while betting heedlessly on boom boom boom and gurgle gurgle gurgle.

It will be a minor treat to rent the DVD, and freeze-frame some of the more choice wooden expressions.

The rest is the usual, spectacle, but coldly served by a reluctant Petersen. [Full Review in Spanish]

Not one who believes in updates, remakes, re-dos or reinventions, I can honestly say this is one "remake" that surpasses the original in every way. (Okay, Gene Hackman would have been the only other plus.)

The new Poseidon is an e-ticket Disney World ride with Fastpass. Ten minutes in, the wave hits, you're underwater, gasping for breath and fighting for your life.

It's a carnival ride, with shocks, endless stunts, and when you're done, you've forgotten it and moved on to something better.

Blueprinted nearly scene by scene from the 1972 original, this remake has more action and better effects as 34 years might enable. Similarly less time is spent on characterization (who cares about that crap anymore?), but the result is still claustrophobic thrills.

Robert Ramsey: You know, there's nothing fair about who lives and dies. You gave Elena a chance. You gave everybody a chance.  "Mayday" Poseidon is one of those disaster movies that worries about visual effects over actual human interaction or feeling. Most of the movies that fill this genre are like Poseidon in that regard and that's where the problem lies in most of them. So visual effects and big action sequences must take over and propel the movie to watchable in order to find entertainment in it. Movies like 2012 and The Day After Tomorrow are examples of disaster movies that work despite not having a great human element involved. Poseidon's cool effects and big water scenes make the movie watchable, but nothing more. A ship is flipped by a huge rouge wave. When the captain of the ship tells everyone to stay in lobby and promises them safety, a small group of passengers rebel and leave the group. They begin to make their way up the ship to the bottom of the ship, which is now the top. Along the way, they have to deal with fires, water, and narrow spaces. It basically winds up being close call after close call, and every once in awhile a character will drop off. The cast isn't too bad here. Kurt Russell, Josh Lucas, Richard Dreyfus, and Emmy Rossum make for decent main characters. The supporting cast that is assembled around them isn't terrible either. The movie isn't really about acting though, it's about the visuals and the visuals don't disappoint. Where the movie disappoints is when the actors actually have to speak to one another and we have to listen to their dumbed down dialogue.  Overall, I'm pretty much indifferent on this one. I don't necessarily like it nor do I dislike it. It's one of those movies where I just can't form a true opinion on it. I realize it's not a great movie, but I also won't blast it like just about every one else. I'm just going to put myself directly in the middle on this one.

Mayday Saw it again! Good Movie. Very fun and thrilling movie meant to be watch and enjoyed. Very beautiful woman in this film too. It is New Year's Eve, and over 2,000 passengers & crew are ringing in the New Year aboard the huge cruise ship 'Poseidon' on the open sea in the middle of the North Atlantic Ocean! A small group of survivors find themselves unlikely allies in a battle for their lives. Preferring to test the odds alone, career gambler Dylan Johns ignores captain's orders to wait below for possible rescue and sets out to find his own way to safety. What begins as a solo mission soon draws others, as Dylan is followed by a desperate father searching for his daughter and her fiancee--a young couple who hours before couldn't summon the courage to tell him they were engaged and now face much graver challenges. Along the way they are joined by a single mother and her wise-beyond-his-years son, an anxious stowaway and a despondent fellow passenger who boarded the ship not sure he wanted to live but now knows he doesn't want to die. Determined to fight their way to the surface, the group sets off through the disorienting maze of twisted steel in the upside-down wreckage. As the unstable vessel rapidly fills with water each must draw on skills and strengths they didn't even know they possessed, fighting against time for their own survival and for each other.

Classic remake that comes out pretty decent. I liked the original more but this was not a bad rent.