The Positively True Adventures of the Alleged Texas Cheerleader-Murdering Mom1993 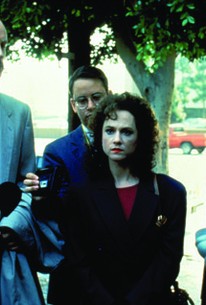 A Texas housewife plots hire a hit man to kill the girl who beat out her daughter for a place on the cheerleading squad in this made-for-cable satire based on a true story. Holly Hunter stars as Wanda Holloway, a twice-married Baptist mother of two who becomes obsessed when her daughter, Shanna (Frankie Ingrassia), gets disqualified from the election for the eighth-grade cheerleading squad because of overly manipulative campaign tactics (i.e. handing out free rulers imprinted with her name). Looking down her nose at neighbor Verna Heath (Elizabeth Ruscio), whose daughter, Amber (Megan Berwick), made the squad, Wanda becomes convinced that there's a conspiracy afoot and decides to do something about it. Getting in touch with her ex-husband's brother, Terry Harper (Beau Bridges) -- a lowlife with a liquor and drug habit and a wife (Swoosie Kurtz) who sees imaginary creatures on the floor -- Wanda all but orders him to find her an assassin on the cheap. Terry chickens out, contacts the police, and helps get the goods on his former sister-in-law before she can do any actual damage. A media circus soon engulfs the participants' small Texas town as Wanda heads to court and tries to prove she was the victim of a setup. Set against the backdrop of the Gulf War and the fall of communism, The Positively True Adventures of the Alleged Texas Cheerleader-Murdering Mom was filmed for HBO by Bad News Bears and Smile director Michael Ritchie. In adapting the Wanda Holloway story for the small screen, the film followed Willing to Kill: The Texas Cheerleader Story, a 1992 ABC TV movie starring Lesley Ann Warren.

Jane Anderson
as Writer (herself)

Phil Donahue
as Talkshow Host (Himself)

George H.W. Bush
as Former US President (Himself)
View All

Full of daffiness, greed and dark-hued humor, whole package is a hoot.

[Holly Hunter gives] one of the great comic performances in modern times.

There are no featured audience reviews yet. Click the link below to see what others say about The Positively True Adventures of the Alleged Texas Cheerleader-Murdering Mom!