Possession (The Night the Screaming Stops)1983

Possession (The Night the Screaming Stops) (1983) 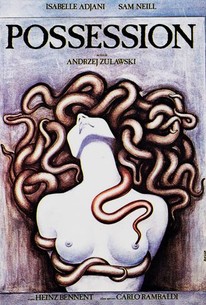 Usually misattributed to the horror genre, this challenging and highly unusual drama stars Isabelle Adjani as a young woman who forsakes her husband (Sam Neill) and her lover (Heinz Bennent) for a bizarre, tentacled creature that she keeps in a run-down Berlin apartment. In the beginning, her husband knows nothing about the monster and sincerely believes that his wife is insane. He has her tailed by private detectives, whom she kills and feeds to the creature. Still unaware of what has happened, the husband contends with the reserved and inadvertently seductive presence of his wife's look-alike (also played by Adjani), a schoolteacher who frequently comes to tutor his son while his wife is away. Though tempted by her quiet goodness and beauty, he is still passionately in love with his wife and even after he finds out about the murders, he stays by her side and helps her conceal her crimes. Filmed amidst the oppressive backdrop of the Berlin Wall by the expatriate Polish director Andrzej Zulawski (who was unable to work in his homeland after too many clashes with the authorities), the picture is so relentlessly intense and so deliberately esoteric, that most viewers would find it too hard to connect with. Still its symbolism, its unbridled and flashy directorial style, and the tour de force performance by Isabelle Adjani earned this unique tale a cult following in Europe. The version originally released in the U.S. had 45 minutes chopped out; in this form, it is barely comprehensible and looks like a cheap, gory feast.

Critic Reviews for Possession (The Night the Screaming Stops)

[Possession] remains one of the most grueling, powerful, and overwhelmingly intense cinematic experiences that you are likely to have in your lifetime.

Adjani won the best actress prize at Cannes for her dual performance (as an unfaithful wife and her angelic doppelganger), but the whole cast is astonishing, exorcising painful feelings with an intensity that rivals that of the filmmaking.

That the film is much more than a gawk-at-it freak show is testament to Zulawski's talent for making even the most exaggerated behavior resonate with pointed and potent emotion.

In much the same way that Possession blurs and blends genres, it also inextricably entangles the personal and the political.

really Possession is like nothing else - an uncompromising and idiosyncratic vision of the divisions that exist around, between and within us all.

Horror being a profitable genre in the early 1980s, Possession was made to pronounce an aesthetic more visceral than cerebral, in turn more superficial than it was initially conceived to impart.

...an art-house experiment that one admires more than one enjoys.

The 1981 film's something of a psychodrama that morphs into an arthouse horror-thriller...

This is a challenging film, in the best possible fashion.

A singular cinematic experience and probably the greatest breakup movie ever made.

It slaps us in the face with naked, raw emotion, worlds away from most light-on-characterization contemporary shockers.

The actors' commitment to this berserk nightmare remains awe-inspiring; whether you've seen Possession many times or wish you never had, it's an experience not easily forgotten.

Audience Reviews for Possession (The Night the Screaming Stops)

Isabelle Adjani gives this everything she's got in a performance of unbridled commitment but that doesn't make it enjoyable nor entertaining.

Ever had the top of your skull removed while an overweight man repeatedly stabbed your cerebral cortex with a crescent wrench? No you say? Well then grab the family, kick those feet up on the ottoman, and brace yourself for some masochistic brain torture. Director Andrzej ZulawskiÃ¢'s frenzied nightmare regarding a deteriorating marriage is an absurd carnival of agony. One that can best be described as a violent hallucination caught on film. When a man sets out to understand the reasons for his wife's infidelity, he ends up finding a lot more than he bargained for. And I mean a lot more. Even if I told you more about the plot, the film would not be spoiled. It truly needs to be seen to be believed. Should you choose to subject yourself to it. When I read that Zulawski wrote the screenplay while in the midst of a messy divorce, I was not the least bit surprised. Much like David Cronenberg's The Brood, there is a palpable pain that permeates this lurid tale. Why do we inflict such excruciating pain on the ones we claim to love? This is just one of the many questions the film brings to the surface. It joins the ranks of other equally important questions such as Ã¢what in the world is with that subway scene?Ã¢ and Ã¢did I just see a tentacle?Ã¢Â� This bizarre story is accompanied by wild camera work. Zulawski employs dizzying long takes, crazed hand-held camerawork, and frenetic editing. Making the experience all the more eccentric. Also, Sam Neill works his way through the material with the same ease and grace as a middle school student reading King Lear out loud for the first time. (One that desperately wants to impress the teacher and cares little for subtlety) I like to pretend that seconds before shooting a scene, Neill was told that his family would be slaughtered if he didn't overact. It made his performance easier to understand. At one point in the film, Neill's wife Anna states that Goodness is some kind of reflection upon evil. Much like the film itself, I am not quite sure what it means. Hell I don't even know if Zulawski knows what it means exactly. There are myriad ways to read this film and should I find myself able to muster up the courage to watch it again, id love to better understand what Zulawski is trying to say here. Until then, i'll just enjoy the night terrors that are sure to come as a result of watching Possession.

Funny, I don't remember him being so bad in Omen III: The Final Conflict, but having watched John Carpenter's In the Mouth of Madness and Andrzej Zulawski's Possession in recent succession, I'm now of the firm opinion that Sam Neill should be forcibly restrained from making any more horror movies; they bring out the hammy worst in the man. Nevertheless, even Neill is upstaged here by the extraordinary supporting performance - and I don't intend that as a compliment - of Heinz Bennent, quite the most entertaining piece of scenery-chewing I have witnessed in a good long while. This wasn't too bad a movie, actually: the atmosphere is nicely oppressive, Isabelle Adjani certainly throws herself into her role and the restless camerawork is marvellous throughout. What the film lacks, however, is a little subtlety and a lot of control; it's shrill and hysterical from beginning to end, often comically so. It's very apt that Possession is frequently compared to David Cronenberg's The Brood - and there are, indeed, similarities - because Cronenberg immediately springs to mind when one considers which other director might have been able to make a better movie out of this; Polanski is another.

No one can deny that this film is quite bold and unpredictable in all its mind-blowing weirdness, but Zulawski really fails in his attempt to confer a serious, Bergmanian meaning to a story that clearly emulates the narrative style of Polanski and Cronenberg.