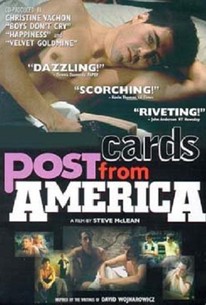 This avant garde film is based on two angry autobiographical books by David Wojnarowicz: Close to the Knives and Memories That Smell Like Gasoline. Wojnarowicz, a noted performance artist, died of AIDS . The film examines three sides of his life. The first looks at his suburban childhood and the abuse he suffered at his alcoholic father's violent hand. The second chronicles his experiences as an teen-age street hustler and criminal in New York, and the third section, which is highly abstract, follows the adult Dave as he wanders through a dangerous desert. Once these identities are established, chronology is scattered to the winds, and the three ages of David play up to and comment on each other. The work of Wojnarowicz is also represented in Knud Vesterkov's film, By The Dawn's Early Light.

Todd Marsh
as Son with Aids

Critic Reviews for Postcards from America

Big mystery is how did such potentially dramatic and touching subject, about artist David Wonjnarowicz who died of AIDS in 1992, become such an elusive and frustrating art film.

There are no featured reviews for Postcards from America at this time.