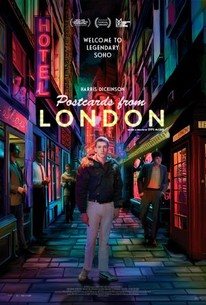 Postcards from London tells the story of beautiful teenager Jim (Harris Dickinson of Beach Rats, The Darkest Minds), who finds himself in Soho where he falls in with The Raconteurs - a gang of unusual high class male escorts who specialize in post-coital conversation. From shy novice to sought after escort and eventually artist's muse, Jim would be the toast of the town if it wasn't for his annoying affliction. He suffers from Stendahl Syndrome, a rare condition which causes him to hallucinate and faint when he counters real works of art. But when Jim is roped into the world of detecting art forgery, could his condition bring about his downfall?

News & Interviews for Postcards From London

You’re a Fresh One, Mr. Grinch… For Now

View All Postcards From London News

Critic Reviews for Postcards From London

It's worth it for Harris Dickinson and you won't have seen anything like it.

Here is a diverting, self-conscious fantasy sketch of gay life and gay sensibility composed of what the film-maker imagines or remembers of bygone Soho's lost bohemianism.

Despite a skillful use of color, lighting, framing and music, the movie's artificiality might have played in a short film but becomes tedious and pretentious when stretched to 90 minutes.

Aside from bad filmmaking, I don't know what any of this means.

McLean's nostalgia for the Soho of Francis Bacon, Freud, and Jarman (all of them clear influences on his own work) is touchingly wistful about the ravages of time, and he's serious about probing the mixed blessings of sex, art, beauty and authenticity.

Although Postcards from London ultimately doesn't quite live up to its considerable ambitions, it offers plenty of arresting moments along the way.

There is a slick coolness to its unabashed insistence in being only symbolic of the city it namechecks in its title.

McLean has a keen eye for the visual and the plastic, but on the evidence ... he's somewhat lacking with regard to the narrative and performance arts.

It's got the trappings of a great coming-of-age drama, but sadly gets a little too bogged down in its lush aesthetics and avant-garde pretensions.

Art and sex-but way too much of the former-are featured in a whimsical but retrograde gay concoction.

Intense, seductive and organically strung together, the motion picture discusses all about art and opportunity in a postmodern era filled with kitsch and the superfluous mores of a self-aggrandizing society.

Audience Reviews for Postcards From London

There are no featured audience reviews yet. Click the link below to see what others say about Postcards From London!