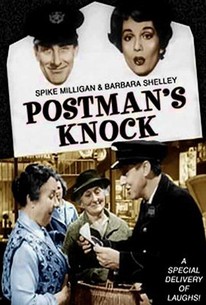 In this routine, slapstick, frenetic tale, British comic Spike Milligan stars as Harold Petts, a rural mailman with a sudden promotion that ends up getting him into a lot of trouble. Harold is supposed to be trained behind the scenes at London's busiest post office but even after his first day in the city he is already in difficulties. He soon meets Jean (Barbara Shelley), a mediocre art student with big aspirations for her future. The duo eventually find themselves as top suspects in a mail-theft ring, with the police and the Post Office higher-ups close on their heels. ~ Eleanor Mannikka, Rovi

There are no critic reviews yet for Postman's Knock. Keep checking Rotten Tomatoes for updates!

There are no featured reviews for Postman's Knock at this time.