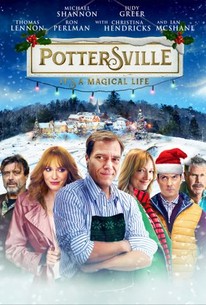 In a year full of disturbing events, there's something uniquely unsettling about seeing Michael Shannon look as shaken as the rest of us. Maynard might save Christmas, but we all lose a little something along the way.

A good-hearted but overly broad and underwhelming debut.

I just don't know what to say or how to adequately describe this film.

Pottersville is an undeniably bad movie; regardless of whether its script is a self-aware or how good the acting is, it's an outlandish story that finds resolution by cribbing heavily from It's A Wonderful Life.

Pottersville is one of two things, the worst Christmas movie ever or the best movie ever.

Shannon deserves better than this and that might be aimed at the rest of the cast. The filmmakers adopt a style that doesn't embrace the darker elements of the script before tacking on that fuzzy conclusion. This is a Christmas film that won't appeal to the masses or the people it was marketed to. The Fuzzies are the most interesting part of the film and I would've watched that film with the bigfoot aspect included. The biggest issue they have is the tone, they never go to that darker element of the script and just seem intent to be floating on the surface. This had a lot of potential and I feel Shannon was looking at the funny moments of the script without considering how the filmmakers would turn the script into a film. Good for a night in but not a classic that will be rewatched over time. 12-03-2018.

Talk about a weird fucking movie. And I don't mean weird in the sense that Yorgos Lanthimos films are weird. I just mean in that I don't really know what to make of this movie and the events that transpired within. First things first, only reason I watched this movie is because of Michael Shannon. The film has a really talented cast, full of actors that I really like. But the selling point to me was Michael Shannon, that's it, simple as that. I love Ian McShane, Judy Greer, Ron Pearlman, Tom Lennon and Christina Hendricks, but I don't think any of them, individually, could have gotten me to see this movie if it wasn't for Shannon. I love the man, I really do. And I've always wanted to see him do some comedy. Shannon has done some comedy, like Let's Go To Jail, for example. But he was a supporting character there. This movie, theoretically, he's the lead character. And I say theoretically, because after the whole mess with the Bigfoot sightings start happening, Shannon essentially becomes a secondary character in his own movie. He lets the 'Australian' monster finder guy take over the proceedings and he, quite frankly, disappears for a good chunk of the movie. When I tell you that Shannon's scenes, in my opinion, don't comprise for than 50% of all of the movie, please believe me, because it's the truth. I think perhaps the biggest problem with this movie is that it wants to tell a heartwarming tale of Maynard Greiger, who's done his best to help the people of his town, that's fallen on hard times recently, by dressing up as Bigfoot and causing a sensation that's bringing tourists to his struggling town and business on top of media attention. But then the movie also wants to be this quirky comedy about this arrogant monster finding filming his crappy tv show and being exposed for the fraud that he is when the real search for Bigfoot is underway. The fact of the matter is that this movie really isn't even that long for it to be the things it wants to be effectively. While I get the whole wanting to make Maynard the glue that holds the town together, he's not in the movie enough to get a real sense of what he means to the town. So that makes the whole climax where the town apologizes to Maynard for turning their backs on him (after it's revealed that he's been Bigfoot all along) when he really needed them unsatisfactory. The movie is absurd in that, after the first Bigfoot appearance, and the town becomes a media and tourist sensation, the sights keep happening. Maynard, as Bigfoot, literally goes up to people's houses to wave at them. Seriously. He's not 20-30 feet away from people, he's not even 10 feet away from them and these people still think it's a real Bigfoot. It's clearly a guy wearing a fucking gorilla mask. Even the furries in the movie wear more believable outfits than the one Maynard was wearing and yet everyone in town bought Maynard's Bigfoot. The only reason anyone would enjoy this movie is if they can pretend that all of these people, even seeing Bigfoot up close, would be so stupid enough to not notice that it's a mask. It's such a ludicrous concept. It's even more absurd when, as I already mentioned, the furries in the movie, that they poke fun of naturally, wear more believable costumes than Maynard's. Your enjoyment of the movie will come if you're able to go along with this conceit and, as silly as things got, I was unable to go along with it. Another major problem is the fact that the movie goes something like 80 minutes. That's not a problem in and of itself, it's just the fact that they seem to rush through almost everything. Maynard dresses up as Bigfoot once scene and the next, the town has already become a Bigfoot hotspot. There's no real sense of progression. Not that there would be, given how short the movie is. They want to get so much stuff into this movie and they do succeed at filling this movie full of content, but after I was done, I had trouble remembering specific scenes. Everything flies by so fast, that it's an absolute and total blur. I really cannot remember much about this movie. As far as comedy is concerned, I think it misses the mark. I like Tom Lennon and he does give an enjoyable performance, but the way his character is written makes him more obnoxious than entertaining. The casting is all around solid, it's just that the script really does hamper them. There's literally nothing to the script. I've hard of the saying wide as an ocean, deep as a puddle. This describes something that, on its surface, might seem complex, but when you get right down to it is about as shallow as they come. This doesn't describe this movie, in the slightest. I'd like to make an adjustment to that phrase, this is wide and deep as a puddle. There's no real depth to any of this. And, again, it's meant to be a joyful Christmas movie, right? Well, really, I mean I think ABC Family original movies have more depth than this. I'm not saying that this is a bad movie, I found it watchable at best, but there's nothing that this movie excels at that isn't pretending that its namesake town's inhabitants are the biggest idiots on earth. There's nothing I can really recommend about this. Solid performances from the cast aside, there's nothing to the movie that's worth recommending. I'm sure that Harold and Kumar Christmas movie is available on the cheap, watch that instead. Or any other Christmas movie in existence, a good chunk of them are bound to be better than this. Even Michael Shannon can't save this from mediocrity.