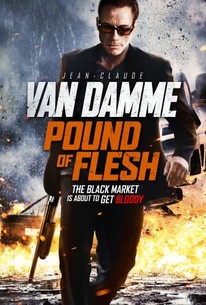 In China to donate his kidney to his dying niece, former black-ops agent Deacon awakes the day before the operation to find he is the latest victim of organ theft. Stitched up and pissed-off, Deacon descends from his opulent hotel in search of his stolen kidney and carves a blood-soaked path through the darkest corners of the city. The clock is ticking for his niece and with each step he loses blood. (C) eOne

Ryan Pyne
as Yevgeny
View All

News & Interviews for Pound Of Flesh

View All Pound Of Flesh News

Critic Reviews for Pound Of Flesh

Conceptually pedestrian but decently handled in all departments.

It's not enough for Pound Of Flesh to be likable. Its existence isn't an affront to the God its characters keep talking about, but it's not exactly a reason for giving thanks, either.

This is a fairly unremarkable film that happens to star Jean-Claude Van Damme.

Van Damme hounds will lavish their pennies on, although many may end up with a little less action than they're used to.

That it's not terrible despite its debits is probably the most generous assessment of Jean-Claude Van Damme's latest, a watchable oddity.

The car chase is a combination of bad f/x, a lack of speed and "close calls" & "collisions" that make it the saddest thing I've seen since all of Dear Zachary.

The feature wants to be a massive action event, but it doesn't have the resources and the simplicity to snowball through 100 minutes of excitement, wasting a perfectly good revenge plot on tedious domestic woes.

There's no reason to ever watch Pound of Flesh unless you're some kind of Van Damme completist.

Extremely low-rent actioner that's only for die hard JCVD fans. Even Van Damme seems bored, opting to keep his sunglasses on for almost the whole movie.

Old School Van Damme -- who can still do the stunts, and still winds up in movies where the stunts are all you notice.

Audience Reviews for Pound Of Flesh