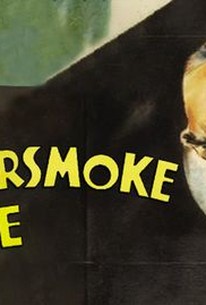 Advertised as "the screen's greatest round-up of western stars" and "The Barnum & Bailey of westerns," RKO Radio's Powder-Smoke Range features such shoot-'em-up veterans as Hoot Gibson, Harry Carey, Tom Tyler, Guinn "Big Boy" Williams, Bob Steele, William Desmond, William and Franklin Farnum (no relation), Buzz Barton, Buddy Roosevelt, Wally Wales (aka Hal Taliaferro), Art Mix (aka Denver Dixon) and Buffalo Bill Jr. (aka Jay Wilsey). It's amazing that the screenwriters found any room for a story, but they did: Rancher Tucson Smith (Harry Carey) finds himself at odds with corrupt mayor Steve Ogden (Sam Hardy), who dabbles in bootlegging and cattle rustling on the side. Hardy hires gunman Sundown Saunders (Tom Tyler) to bump off Tucson, but before long Tyler has joined forces with our hero, who has already enlisted the aid of his old saddle pals Stony Brooke (Hoot Gibson) and Lullaby Joslin ("Big Boy" Williams). Often cited as the first film based on William Colt MacDonald's Three Mesquiteers stories, Powder-Smoke Range was actually preceded by Beacon Pictures' Law of the 45s, in which Big Boy Williams played Tucson and Al "Fuzzy" St. John was Stony. Though RKO Radio decided against launching a "Three Mesquiteers" series, the slack was taken up by Republic Pictures, who ground out 51 Mesquiteers westerns from 1936 through 1943.

Nelson McDowell
as Man at the Bar (uncredited)

Proved to be a box office success but a critical disappointment despite its powerful cast of Western favorites and old-timers.

There are no featured reviews for Powdersmoke Range at this time.