Power of Nightmares: The Rise of the Politics of Fear (2004) 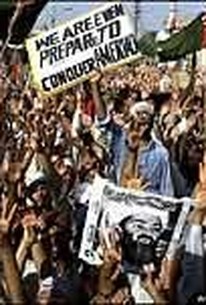 Political proverb states that a population in fear is a population that is easily controlled. In this documentary exploring the climate of fear that existed in the wake of the September 11, 2001 terrorist attacks on the United States, filmmaker Adam Curtis explores the possibility that Western neoconservatives used anxiety as a tool to manipulate the masses into behaving in a predictable and controllable manner. By claiming that contemporary Western Democracy relies more on propagating the myth of an all-powerful al-Qaeda just waiting for the right time to strike rather than focusing on domestic issues and the bettering of the people, as previous generations of politicians had done, Curtis suggests that Washington is intentionally manipulating the population into a defensive stance that gives those in charge more power than necessary. ~ Jason Buchanan, Rovi

Critic Reviews for Power of Nightmares: The Rise of the Politics of Fear

Adam Curtis has become the most exciting documentary filmmaker of our time. He's at once a psychologist, a historian, a journalist, a wizard of images, and a fearlessly incisive cultural detective who delves beneath the hidden myths of the modern world.

Though his bias is obvious, Curtis does his homework, getting the most damning evidence from interviews with the neocons themselves.

A sprawling, intellectually ambitious documentary about the political phenomenon usually referred to in journalistic shorthand as the war on terror.

Curtis' The Power of Nightmares finds that the basis of 21st century political power is fear. And for nearly three hours he makes it very hard to argue it's not.

As partisan filmmaking it is often brilliant and sometimes hilarious.

A richly rewarding film because it treats its audience as adults capable of following complex arguments.

Curtis weaves a satisfying, explain-it-all narrative which, like any good conspiracy theory, provides considerable comfort for those who fear the world really is as unknowable as the neo-cons have warned.

Problematic as it is, this is that rare kind of political film that makes a good faith effort at getting its viewers to look at the world in a different way.

Audience Reviews for Power of Nightmares: The Rise of the Politics of Fear

I wish the argument was more fully formed in some regards. Curtis glosses over certain details he doesn't know how to really address, but he still manages to make some really strong points. Mostly what works is his bold supposition that the danger of al-Qaeda as a shadowy organization with thousands of followers has been largely exaggerated. I also like the parallel tale of the rise of Islamic Fundamentalism and the Neo Conservatism.

a 3 pt documentary film on the link between radical islamists and the neoconservative movement. fascinating stuff and mostly very plausible. all the films of adam curtis can be found here--> http://thoughtmaybe.com/video/the-power-of-nightmares

This is an excellent three-part BBC documentary which traces the origins of radical Islamism and American Neo-Conservatism to a mutual hatred of post-WWII US liberalism. To the Neo-Conservatives, liberalism was to blame for an epidemic of selfish individualism that threatened to tear American society apart, while the Islamists were equally alarmed about the corruptive influence of this perceived 'moral decay' on the Muslim world. The Neo-Conservatives' solution: to create a unifying, mythical Nightmare that would bind society together. Initially they did this by exaggerating the threat posed to the United States by the moribund Soviet Union. The radical Islamists solution: a campaign of violence that would shock the Muslim masses back to the Qur'an. The terrorist attacks of 9/11 provided the Neo-Conservatives with just what they had been looking for since the collapse of the Soviet Union left them with an 'Evil Incarnate' vacuum to fill: a 'global terror network' of jihadists called Al-Qaeda. Although the final episode perhaps smacks a little too much of conspiracy theory, on the whole the The Power of Nightmares is beautifully put together and very persuasive. If I can nitpick, the use of music is effective to begin with but I was sick to death of those couple of bits of Eno, Ennio and John Carpenter after three whole hours! Adam Curtis has struggled to get his film seen in the US but at present it is available on the Internet Archive. Essential viewing for anybody trying to make sense of the times we live in; see it while you can.

Everyone should see this

Power of Nightmares: The Rise of the Politics of Fear Quotes