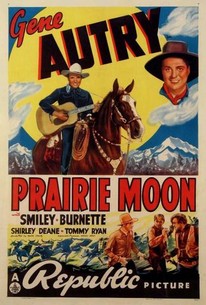 Just before going on a brief one-man strike for better wages, Gene Autry starred in the Republic musical western Prairie Moon. In this one, a trio of tough Chicago orphans are relocated to the Wild West and ensconsed in their late uncle's ranch. The three street punks-Brains (Tommy Ryan), Nails (Walter Tetley) and Slick (David Gorcey)-are the sons of Chicago gangster who was put "on the spot" while hiding out at the ranch. With Autry's help, the kids learn to assimilate themselves to the Wide Open Spaces, and even manage to break up a gang of cowboy racketeers. Shirley Deane, late of 20th Century-Fox's "Jones Family" series, is an appealing heroine.

Raphael
as Ray
View All

There are no critic reviews yet for Prairie Moon. Keep checking Rotten Tomatoes for updates!

There are no featured reviews for Prairie Moon at this time.