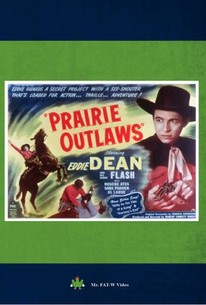 Filmed in less than glorious two-strip Cinecolor, this average Eddie Dean western benefited from Dean performing "Ride on the Tide of a Song", "Journey's End"and "I Can Tell by the Stars". The story surrounding all this warbling, however, was the standard one of a gang of thugs interfering with the building of the telegraph. Headed by Drake Dawson (Terry Frost) and a crooked lay judge (Warner P. Richmond), the gang stirs up trouble among the local Indians, who are persuaded that the telegraph may mean the end of the buffalo. Enter retired rangers Eddie Dean, Soapy Jones (Roscoe Ates) and Stormy Day (Al "Lash" La Rue), who are persuaded back in harness to secure the prompt continuation of the building project. Carrie Bannister (Sarah Padden), the widow of a slain ranger captain, persuades her friend Chief Black Fox (Chief Yowlachie) to help secure the telegraph rather than oppose its construction. On their way to gather more information on the outlaws, Soapy and Skinny (Robert "Buzzy" Henry, Mrs. Bannister's young son, are ambushed by Dawson's men. Discovering an abandoned gun near a wounded Skinny, Soapy recognizes the weapon as belonging to the murdered Captain Bannister. When Eddie learns that Dawson himself is carrying a matching gun, Bannister's murderer has finally been found. The rangers arrive just in time to round up the gang and, peace finally restored, a recovered Skinny is made an honorary ranger. A truncated black and white version of this film was released in 1948 under the title of Prairie Outlaws, presumably in order to cash in on the appearance of Al "Lash" La Rue, who by then had his own starring series.

Eddie Dean
as Himself

White Flash the Horse
View All

There are no critic reviews yet for Prairie Outlaws. Keep checking Rotten Tomatoes for updates!

There are no featured reviews for Prairie Outlaws at this time.