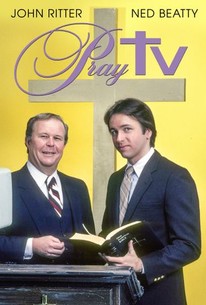 The made-for-television Pray TV was the subject for hot debate long before its February 1, 1982 debut. This even-handed exploration of the televangelism business stars Ned Beatty as the Reverend Freddy Stone, whose religious empire nets $3 million annually. John Ritter co-stars as Rev. Tom McPherson, a newly ordained clergyman who joins the Stone operation. As Ritter begins to question the religious ethics behind Stone's lucrative ministry, a subplot develops involving Reverend Gus Keffer (Richard Kiley), who in contrast to Stone must operate on a shoestring, minus the glittery trappings of TV, radio, and SRO revival meetings. Lane Slate's teleplay takes great pains to offend no one; whether this is good or bad is up to you. Pray TV bears no relation to the earlier theatrical-feature comedy of the same name.

Mel Tormé
as Himself
View All

There are no critic reviews yet for Pray TV. Keep checking Rotten Tomatoes for updates!

There are no featured reviews for Pray TV at this time.