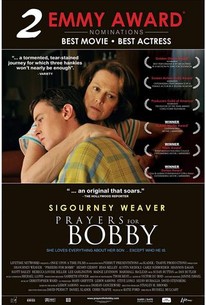 Critics Consensus: A devastating true story and terrific performance by Sigourney Weaver give Prayers for Bobby palpable power, although some viewers may find this well-intentioned film too calculating in its efforts to wring tears.

Critics Consensus: A devastating true story and terrific performance by Sigourney Weaver give Prayers for Bobby palpable power, although some viewers may find this well-intentioned film too calculating in its efforts to wring tears.

Critic Consensus: A devastating true story and terrific performance by Sigourney Weaver give Prayers for Bobby palpable power, although some viewers may find this well-intentioned film too calculating in its efforts to wring tears.

A conservative Presbyterian mother reaches out to the gay community for support after driving her homosexual son to suicide in this made-for-television movie adapted from Leroy Aaron's 1995 novel. Bobby Griffith (Ryan Kelley) hails from a devoutly Christian family. Lately Bobby's been questioning his own sexuality, and upon confiding this information to his older brother, the news quickly circulates to their parents and other siblings. While Bobby's father and siblings resolve to stand by him despite their opposition to his startling revelation, his mother Mary (Sigourney Weaver) believes that her son is committing a sin, and encourages him to change his ways with the help of the church. Despondent over his experiences in the church, Bobby decides that his best option is to move out of the family home, all the while hoping that his mother will find a means of accepting him for who he is. But Mary is staunch in her position, and when Bobby realizes he'll never live up to his mother's expectations he takes his own life. Devastated, Mary seeks consolation from her pastor but fails to find the answers she's looking for. In time, Mary begins a dialogue with the gay community, and discovers that sometimes support can come from the places we least expect. ~ Jason Buchanan, Rovi

Critic Reviews for Prayers for Bobby

Poignant but as heavy handed as an old after-school special. It delivers an important message, but I wonder whether those who need to hear it will stick around long enough to listen.

The cast is just perfect -- not a missed beat. And Weaver? She puts in a performance that is right up there with her best work.

It's a total tearjerker, with a powerhouse performance from Weaver.

It doesn't mean to feel maniacally manipulative. It just happened that way... Sigourney Weaver is the film's strength; the neat Lifetime tie-a- ribbon ending is its biggest weakness.

That said, the movie has flaws aplenty... Still, there's no denying the story's impact, as it echoes more than 25 years after Bobby's death.

The problem here lies with wrapping that message inside a movie that has so little nuance it plays like a public service announcement.

Here's the obvious question: What is Sigourney Weaver doing in a Lifetime movie? Answer: Giving one heartrending performance.

Weaver gives what is undeniably one of her best performances.

A nice showcase for Weaver, a sensitive story given the light Lifetime touch. Have a box of Kleenex nearby.

Weaver is superb -- the depth and authenticity of her performance are unusual, not to say unheard of in a Lifetime movie. This is not a perfect movie, nor even a great one, but there are moments in it of absolute transcendency.

Prayers for Bobby is not a great movie, but it is a worthwhile one with a purpose beyond mere entertainment. It should be required viewing for any parent who considers disowning his or her gay child.

With heavy-handed symbolism adding further clutter, it's not until the heart-rending final act and Weaver's impassioned pleas that the film's events really hit home in the way they deserve.

Audience Reviews for Prayers for Bobby

A sad real story about how intolerance destroys lives and how it takes sometimes a tragedy to force people to open their eyes, and Sigourney Weaver offers a powerful performance in this movie that tends a bit towards melodrama but is sincere about what it wants to say.

Excellent performance by Butler. Decent and often understated performances from Weaver and Czerny. Very well done for a made-for-TV movie, but somewhat underwhelming if it had been made as a general release feature film. Wonderful, thoughtful, real-life presentation of the struggles faced by everyday families with LGBT children.

Thought provoking made for TV drama about the irrevisible damage that can be caused by blind faith and bigotry as well as the callous hatred zealots inflict in the name of their own interest and prejudice against anything they don't understand or agree with. Sigourney Weaver is an amazing actress.

This is the true story of Bobby Griffith, who killed himself in 1982. Bobby was from a devote catholic family and was also gay. When he came out, everyone tried to "fix" him and it drove him to see himself as a bad person. This movie had some amazing performances in it, so much so that it was hard to watch. It's not just a true story, but it's also performed in such a raw fashion, that it feels like you're standing in the Griffith living room watching it all unfold. A lot of similar movies about tragic stories have been made, but none of them share the raw emotion that this movie has. Sigourney Weaver is at the top of her game and it brings out the best in everyone, especially Ryan Kelley who gives the best performance of his career as Bobby. This is as real as it gets and you will need a box of tissues, but if this is a topic that effects you or someone you know, than I highly recommend taking the time to see this film.