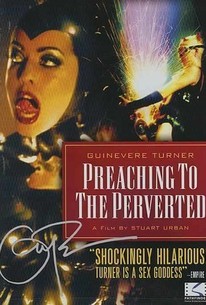 Preaching to the Perverted Photos

A young man learns that love hurts (or at least it does if you're doing it right) in this saucy comedy from England. Henry Harding (Tom Bell) is a member of British Parliament and a self-styled moral crusader who is deeply disturbed by reports that Tanya Cheex (Guinevere Turner), a dominatrix from the U.S., has opened a night club for S&M enthusiasts in England. Harding is determined to put Cheex out of business, but first he needs to collect evidence of her activities, so Harding persuades Peter Emery (Christian Anholt) -- a young man with political ambitions, Christian principles, and his virginity intact -- to attend the club incognito and videotape the proceedings. To Peter's great surprise, he discovers that he rather likes a bit of spanking and leather fetishism, and he soon becomes quite infatuated with Tanya, making him all the less inclined to help shut down her club. Preaching to the Perverted presented Guinevere Turner in her first starring role after her breakthrough in the acclaimed independent feature Go Fish. ~ Mark Deming, Rovi

Stuart Who Cumski
as Gay Browser

Keeley Flanders
as Tanya As A Child

Alex Pooley
as Child With Puppy

The Shend
as Bouncer

Desmond Tutu
as Performer With Penis

Critic Reviews for Preaching to the Perverted

The majority of Preaching to the Perverted is just unpleasant to sit through...

Audience Reviews for Preaching to the Perverted

There are no featured audience reviews yet. Click the link below to see what others say about Preaching to the Perverted!

Preaching to the Perverted Quotes