Precious: Based on the Novel Push by Sapphire2009

Precious: Based on the Novel Push by Sapphire (2009) 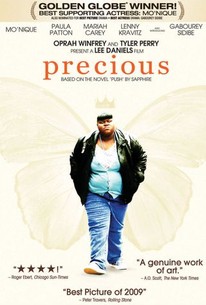 Critics Consensus: Precious is a grim yet ultimately triumphant film about abuse and inner-city life, largely bolstered by exceptional performances from its cast.

Critics Consensus: Precious is a grim yet ultimately triumphant film about abuse and inner-city life, largely bolstered by exceptional performances from its cast.

Critic Consensus: Precious is a grim yet ultimately triumphant film about abuse and inner-city life, largely bolstered by exceptional performances from its cast.

Precious: Based on the Novel Push by Sapphire Photos

Monster's Ball producer Lee Daniels follows up his 2005 directorial debut, Shadowboxer, with this adaptation of author Sapphire's best-selling novel about an overweight, illiterate African-American teen from Harlem who discovers an alternate path in life after she begins attending a new school. Clareece "Precious" Jones is only a teenager, yet she's about to give birth to her second child. Unable to read or write, Clareece shows little prospect for the future until discovering that she has been accepted into an alternative school. There, with a little help from a sympathetic teacher (Paula Patton) and a kindly nurse (Lenny Kravitiz), the young girl receives something that most teens never get -- a chance to start over. Mo'nique co-stars in an inspirational drama featuring the debut performance of screen newcomer Gabourey "Gabbie" Sidibe. ~ Jason Buchanan, Rovi

Ashley Livingston
as Girl With Jermaine

News & Interviews for Precious: Based on the Novel Push by Sapphire

View All Precious: Based on the Novel Push by Sapphire News

Critic Reviews for Precious: Based on the Novel Push by Sapphire

When discussing comedians who became dramatic actors, Oscar winners Robin Williams and Jamie Foxx come to mind, as do Jim Carrey and Steve Carell. But none had a more extreme transformation than Mo'Nique for Precious.

This is either a good film with quite a few flaws, or a flawed film which is also quite good, but that's all right. None of us is perfect, after all.

The performances of Sidibe and Mo'Nique are extraordinary and spellbinding.

... Precious is a true story of survival and hope and not to be missed.

The remarkable Sidibe is one of several daring casting choices by director Lee Daniels.

It is a classical tragedy in the Greek sense, and runs its characters (and viewers) through a wringer of pity and terror on the way to its devastating catharsis.

Boasts several of the most outstanding performances of the year, along with a relentlessly taxing plot and disquietingly unforgettable imagery.

Newcomer Gabourey Sidibe shows that we don't need the fantasy sequences to reveal what Precious is feeling, conveying her character's lifetime of hurt with blazing intensity.

Do yourself a favor and take a chance on Claireece 'Precious' Jones.

For its portrait of a complex young woman caught in horrific circumstances, Lee Daniels' story - embellished by some incredible performances - is truly exceptional.

Those moments are what push Precious in the TV movie of the week direction. But when Daniels steps back and lets the story and the performances speak for themselves, this is powerful stuff.

Audience Reviews for Precious: Based on the Novel Push by Sapphire

The greatest achievement of this bleak drama is how it makes us sympathize with a character that could have been easily stereotyped if played by a not-so-great actress, but Sidibe is superb as well as Mo'Nique, who shines as the selfish mother.

Deriving from some controversial source material, "Precious" is a very well made picture with performances that will blow your mind. It is definitely a film for people with strong stomaches and someone who can cope well with watching or hearing about rape. It revolves around the life of Clareece, an abused teenager who has never gone to school and is raped by her father to birth children into the family. Her transformation out of the family is really what the core of this movie is about, and it is shown with pure wonder, with some very cool stylistic techniques and questionable editing. This film feels a little too explicit at times, but I loved watching it, and it's very commendable. Definitely worth it's praise!

'Precious' should probably be rated higher than 2 1/2 stars, but I found the movie so depressing. I prefer my entertainment less realistic than this I guess.

Precious: Based on the Novel Push by Sapphire Quotes