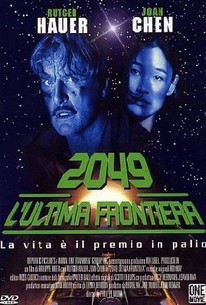 Philippe Mora, the genre filmmaker whose marsupial-themed Howling III and alien-abduction hit Communion solidified his reputation as a director of clunky, substandard fantasy, returned with this space-set remake of The Treasure of the Sierra Madre. True to form, it's a clunky mess, with Harold Pruett as a young prospector named Ben (complete with a lovable canine sidekick), who teams up with gambler Armand Crile (Rutger Hauer) and a shifty engineer named Horton (Brion James) to look for Au79, a valuable ore also called "Precious." Mora throws in everything but the kitchen sink with sabotage, explosions, crazed hijackings, and a few tacky aliens in an obligatory cantina scene. He also includes a lame CGI monster and some campy humor (as if Don Stroud as a long-haired Asian robot wasn't campy enough). Brion James steals the show as the cynical Horton, and even gets to sing, while Mora makes a cameo appearance as a scummy merchant. Despite its outer-space setting, the science fiction elements pretty much fall by the wayside once the cast leaves the moon and gets to Asteroid 18, which may as well be Bronson Canyon in an old B-Western. While it is true that most science fiction movies are basically frontier Westerns at heart anyway, this one forces the issue in such a way that one can only wonder why Mora didn't just do a straight ripoff of Sierra Madre rather than adding the unnecessary spaceships. Probably because low-budget sci-fi rents and low-budget Westerns don't.

There are no critic reviews yet for Precious Find. Keep checking Rotten Tomatoes for updates!

There are no featured reviews for Precious Find at this time.