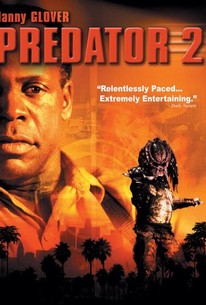 Critics Consensus: The thrill of the hunt is gone in this hackneyed sequel.

Critics Consensus: The thrill of the hunt is gone in this hackneyed sequel.

Critic Consensus: The thrill of the hunt is gone in this hackneyed sequel.

This special effects-heavy science fiction sequel moves the action from the first film's Amazon forest to the urban jungle of L.A. Danny Glover stars as Lt. Mike Harrigan, an LAPD detective baffled by his latest case, the ritualistic slaughter of several drug dealers by a devastating killer who leaves no traces. As Harrigan and his partners, Danny Archuletta (Ruben Blades), Leona Cantrell (Maria Conchita Alonso), and Jerry Lambert (Bill Paxton), try to figure out who or what killed the criminals, FBI investigator Stephen Keyes (Gary Busey) attempts to warn the team away from investigating further. When two of his team are killed in a particularly grisly way, Harrigan uncovers the truth -- their quarry is an alien creature that hunts humans for sport. Attracted to violence, its latest choice of prey is gun-toting Jamaican drug dealers. Keyes and his team know all about the nasty extraterrestrial and its bloody pastime because they've been studying it for ten years, and they've come up with a possible means of dispatching the beast. When that plan backfires, however, it comes down to Harrigan and an extremely irritated otherworldly foe, slugging it out in a rooftop confrontation. ~ Karl Williams, Rovi

Carl Pistilli
as Cop on Phone

Given Arnold Schwarzenegger and director John McTiernan had declined to return, this sequel to their macho sci-fi rumble in the jungle is surprisingly good.

Half as taut and twice as dumb.

Since the predator is imaginary but the people who made this film are not, Predator 2 speaks sadly of their own lack of curiosity and imagination.

A production that, not being able to be compared with the original one, is a more than worthy sequel, entertaining and with a great rhythm. [Full Review in Spanish]

As aggressively ugly in spirit as it is visually, Predator 2 seemingly took everything good about the original Predator and chucked it out the window.

A bold attempt to expand its predecessor's mythos, though fundamentally hamstrung by a schizophrenic tone and Hopkins' dull direction.

Overall it's a timid and inferior follow-up to the more exciting predecessor, but it does strive for new ideas...

Rarely does a sequel outdo its predecessor in every way. Predator 2 is one of that rare breed.

Undeniably bad, but sort of a nice try. [Blu-ray]

The core conceit of the Predator franchise (the hunted victims are prepared for a fight, different than most horror films, right?: " ... didn't expect that monster was actually trying to KILL us", hence upping the anxiety quotient) is discarded for the following feature, successfully ruining the supposed gist of the proceedings and reducing this to a simple us-against-them typical monster piece despite the top heavy cast.

Its a shame that 'Predator 2' doesn't meet to the same standards as Schwarzenegger's action filled gore fest. Having Jamacian gangsters didn't help either, with stereotypes or story. The only highlight is having 'Lethal Weapon's Danny Glover and Bill Paxton (Aliens). Overall, what this film did wrong was creating the spin off universe of 'Aliens Vs Predator'.

Not as good as the original but the urban location, original casting of some great character actors, new look predator, new weaponry and amazing take your breath away action with an excellent ending leaves you wanting more hunting action. Top notch visuals and effects with some lovely over the top cliched characters all add up to a film just out of the 80's but clearly living the dream hehe. Plus you've got 'Private Hudson' incarnated again (he's also come back as a vampire in 'Near Dark') to take on predators ;) A rip roaring violent, bloody and foul mouthed masterpiece that is criminally underrated.

What i like about this movie is that i can nap inbetween scenes and still know exactly what is going on! I love the way bill paxton is back in this other movie when first seeing him in Aliens. Its not the great of a sequel again like the alien franchise that if you've seen the first one then you've practically seen this one, not really worth the effect of watching!