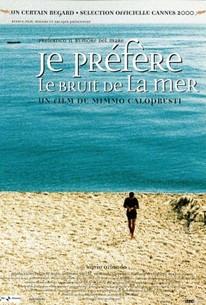 Mimmo Calopresti directs this subtle coming-of-age drama about the prejudices between the north and the south of Italy. Rosario (Michele Raso) is from Calabria in the Italian deep south. Because of the fact that his father is in jail and his mother was rubbed out in a mob hit, he has grown into a fiercely proud and self-sufficient lad. Matteo (Paola Cirio), on the other hand, is a mopey rich kid, the son of successful Turin businessman Luigi (Silvio Orlando). An unlikely string of coincidences leads to Luigi stumbling upon Rosario, who proves to be a distant relative. He arranges for his old friend Don Lorenzo to take in the orphaned waif and encourages him to hang out with Matteo. Soon, as Luigi's prejudice against southerners becomes more and more apparent, Matteo and Rosario become fast friends.

There are no critic reviews yet for Preferisco il rumore del mare (I Prefer the Sound of the Sea). Keep checking Rotten Tomatoes for updates!

There are no featured reviews for Preferisco il rumore del mare (I Prefer the Sound of the Sea) at this time.