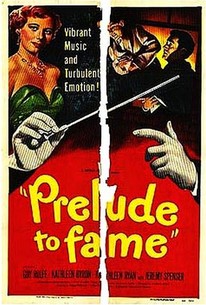 Guy Rolfe is top-billed in the British Prelude to Fame, but the critics' attention was directed at young newcomer Jeremy Spencer. This is the story of a poverty-stricken boy named Guido (Spencer) who turns out to be a musical prodigy. Prodded into fame by a wealthy, childless patroness of the arts (Kathleen Ryan), Guido rises to the uppermost rungs of the musical world -- and loses his childhood in the process. Star Rolfe is cast as John Morrell, the philosophy professor who discovers Guido's genius, only to regret what happens to the boy afterward. Best scene: Jeremy Spencer leading the London Philharmonic without adult assistance. Released in America by Universal-International, Prelude to Fame is based on a story by Aldous Huxley.

David McCallum Sr.
as Leader of Orchestra
View All

Critic Reviews for Prelude to Fame

There are no critic reviews yet for Prelude to Fame. Keep checking Rotten Tomatoes for updates!

There are no featured reviews for Prelude to Fame at this time.