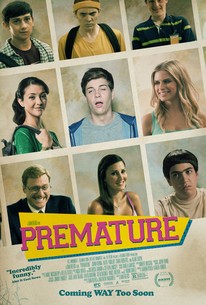 You're in highschool. Facing the biggest day of your life. You need to nail a college interview ensuring your admittance to your parents' beloved alma mater. To keep cool when your life-long crush finally seems to show interest. And then you wake up one morning and realize someone's playing a sick joke, because you're reliving the day's events over and over...and over again. Are you A.) stuck in a dream? B.) Experiencing déjà vu? C.) Having a psychotic break? Whether it's finding a way to get into college, into your life-long crush's pants, or having an even bigger epiphany, you must figure out how to break the cycle before losing your mind. This is the set-up for PREMATURE, the hilarious-yet-heartfelt comedy from first time feature director (and co-writer) Dan Beers that won over audiences at this year's SXSW. An ingenious collision between GROUNDHOG DAY and AMERICAN PIE. (c) IFC Midnight

Nick Wolf
as Melting Down Bee Contestant
View All

Yes, it's predictably crude and juvenile, but in between the bodily secretion gags there's dialogue and performances that are genuinely funny.

A rapidly wearying comedy that mistakes crudeness with humor.

A retread of every lousy '80s high school comedy you never bothered watching.

Only undiscriminating audiences with a pronounced taste for crotch-centric tomfoolery will sample this goulash ...

So now we're stuck with a main character we know is an unrepentant sex offender, basically. Dumb!

We already know the outcome before we even reach the climax.

The filmmakers seem not to understand the difference between a social error and sexual assault, which is deeply depressing.

Imperfect, yet energetic and complete with big laughs and heart, if you're nostalgic for the American Pie flicks, Premature will do the trick.

It's a bizarre and surprisingly clever concept that really makes the most of it for a lot of laughs.

The rare teen comedy with serious raunch and heart, Premature is much, much better than any movie about ejaculation-triggered time travel has any right to be.

Isaac Feldberg
We Got This Covered

I remember laughing, but I don't remember why. It's a little like being stuck in time.

Alan Tudyk as the biggest name actor in this teen gross-out comedy goes overboard in his comedic role as a high school guidance counselor. Thankfully there are three young leads who are worth paying attention to: Katie Findlay, John Karna, and Craig Roberts. This is basically a teen spoof on the concept of the movie Groundhog Day with a day or less in the life of Rob (Karna) repeating with endless variations.

As if it wasn't obvious by the film's premise, this is like Groundhog Day meets, let's say, American Pie. And I say American Pie because it's the first sex comedy that came to mind, but you can pretty much fit in any sex comedy, since what is important is more that it's like Groundhog Day. Which is, probably, my favorite Harold Ramis film, so not a bad choice to draw inspiration from. Essentially, if you weren't aware of the concept already, our main character finds himself in an ejaculation time warp. Every time he ejaculates his day starts over again with his mom walking in on him after...completion. The film, obviously, has a narrative as well, since Rob has to figure out what he's doing wrong that's causing him to be caught in this endless loop where he relives the same day again each time he ejaculates. But, let's be fair, the film is, for the most part, set up this way in order to find funny situations for Rob to find himself in. And don't get me wrong, they do lead to some funny moments, but the film isn't exactly always the most consistent when it comes to comedy. Like Alan Tudyk's first appearance in the film was probably the comedic highlight. And I'm not saying that the rest of the film is unfunny, but, again, just isn't what I would call entirely consistent. There's also a point in the film where you're like, 'ok, it's time to move on, you've exhausted all other options'. I don't wanna say the film stretches its concept far past its breaking point, but they were almost to that point. And, on the other hand, unlike Mystery Team, who just used gross-out gags to hide its flaws and lack of narrative, this one, at the very least, tried to have a story to justify its gross-out gags. I'm not saying the film has the greatest story you will ever see, far from it, nor will I say that it isn't thinly scripted, but at least they make an effort. If you've seen more than one movie in existence, the story will be very predictable to you, but that's not why anyone would really watch this movie. If you want something to be a little more unpredictable, then you'd watch 5-hour arthouse films that are shot in black and white with minimal dialogue. I think people know what to expect when they decide to give this a shot. Perhaps the thing about the film that's most 'endearing', if it can be called that, is the film's nostalgic tone. It just feels like a movie that would've fit right in with the 80s. It just looks and feels like something from that era. Not that I'm saying that it was good, because the score implies I thought it was average, but just saying that it would fit with the films of that era. At least the raunchier ones and not necessarily the Breakfast Clubs or Sixteen Candles of the world. The cast is pretty solid. I've never seen John Karna before, but he's pretty good. Craig Roberts is talented and Katie Findlay was lovely. Alan Tudyk offers the most memorable moments in the film, though Craig Roberts' character does offer a really memorable scene. I think you'll know the one. That's about it really, don't have much else to say about this movie. It's not good because its lack of consistency, but it's a film that will, at the very least, keep your attention, even if you don't think the jokes are that funny. It's just an average sex comedy. Interesting concept and not exactly fabulous execution. It's on Netflix though, so you know what I always says. Average film.