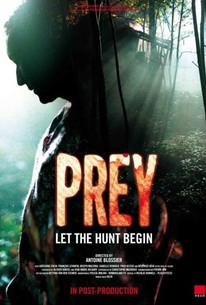 The hunters become the hunted after venturing into the French countryside to track down a mysterious predator that's been terrorizing the local deer population in this backwoods shocker from first-time writer/director Antoine Blossier. Nathan (Grégorie Colin) and his wife Claire (Bérénice Bejo) have recently found out they are expecting their first child as they venture out of the city for Claire's annual family reunion. The owners of a once lucrative pesticide company, Claire's family now faces the very real possibility that their business could go bankrupt. Add to that the fact that the local deer population has been behaving very strangely, and tensions at the traditionally jovial reunion quickly spike. Later, as Nathan and his in-laws and venture into the nearby forest to search for the elusive predator that's been stalking the area, they discover a whole new breed of terror.

There are no critic reviews yet for Prey. Keep checking Rotten Tomatoes for updates!

There are no featured audience reviews yet. Click the link below to see what others say about Prey!