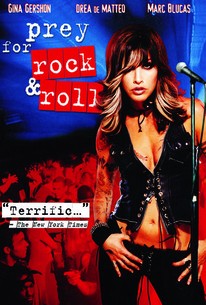 Critics Consensus: Gershon is a fierce rocker, but the plot is a cliche-filled melodrama.

Critics Consensus: Gershon is a fierce rocker, but the plot is a cliche-filled melodrama.

Critic Consensus: Gershon is a fierce rocker, but the plot is a cliche-filled melodrama.

Jacki (Gina Gershon, who also served as a producer) has always wanted to be a rock star. But after years of struggling to make it, she's turning 40, and she's thinking of giving it up. "Do you ever think about being 50 or 60 years old, hauling our gear around, passing out flyers, fighting with bookers, and still sweating around?" she asks her bandmates. Faith (Lori Petty), the talented lead guitarist, gives guitar lessons to hyperactive teens on the side. Faith is seriously involved with the much younger Sally (Shelly Cole of TV's Gilmore Girls), the band's good-natured drummer. Tracy (Drea de Matteo of HBO's The Sopranos), the bass player, is a trust-fund baby with a substance abuse problem and a manipulative lowlife boyfriend, Nick (Ivan Martin). Jacki's thoughts of quitting are put on hold when the band gets a shot at a recording contract for an independent label and a gig opening for X. Then Sally's big brother, Animal (Marc Blucas, formerly of TV's Buffy the Vampire Slayer), arrives in town, fresh out of prison, and stirs up Jacki's romantic life. But when two tragic events shake the band, Jacki is again forced to consider finding something else to do with her life. Prey for Rock & Roll was written by Cheri Lovedog, based on her own experiences in the rock world. It was originally performed as a stage play at CBGB in New York. The stage production was directed by Robin Whitehouse, who gets a writing credit for the screenplay. The film marks the directorial debut of accomplished film music producer Alex Steyermark. It was shown at the 2003 Sundance Film Festival and the 2003 Tribeca Film Festival.

Texas Terri
as Herself

Johanna Portman
as Sorority Girl No. 1

Hallie King
as Sorority Girl No. 2

Gershon is game, but she can't rock. As her fellow band members, however, Drea de Matteo is a goddess of cool and Lori Petty breaks your heart. Steven Trask's music is as much a plus here...

The film has its sensibilities in the right place.

Aside from Ms. Gershon's performance (none of the other cast members actually played), there's little to elevate the music -- or the movie -- above cliché.

Played with the right combination of weariness and optimism by Gina Gershon, Jacki will be recognizable to any woman who has ever strapped on a guitar and plugged in, as well as to those of us who have encountered her.

A rock drama that's hung over with inauthenticity.

It's a raw and raucous rock story that, for once, gets the big picture and the small details right.

Too bad the music sucks and the tale's flat as a board.

There's a sharp sense of honest rock-chick energy that draws us into this film, even when its story takes a few overwrought and melodramatic turns.

Cult favorite Gina Gershon is at the top of her smart, snarly game...

Gershon is the only reason to watch the film.

Too much of a morbid soap opera to be any fun or truly dramatic.

While it gets a good deal of the background right, the picture stumbles in the dramatic department.

And this is why I don't like "indies". Are the people who write them incapable of happy endings? Or even a positive ending? I'd settle for a hopeful ending. But no. And it's a shame, because a film like this, that details an endless struggle, NEEDS an upbeat ending.

This is supposed to be some dyke must-see, however, the only thing it's got going for it, is exactly that. The women look super-sexy on stage (Gina Gherson, Drea De Matteo and Lori Petty are not only fit but believably bad-ass) yet the film itself is poorely scripted and awfully lit, and if it didn't have Hedwig's Steven Trask taking care of the music, I think it would have sucked big time. If you want to spend some time feasting your eyes on the leads, then this movie is for you. If, however, you expect something deeper, you will have to feel content with the "I heart Music that's why I am still 40 and play it" over-riding theme, which may in itself not be so bad, yet it hardly gives us any additional insight into life as such.

This movie is one of her best!

Movie about a rock band. This movie shows us themes about life goals, drugs, rape, friendship, etc. But I only found it so so.