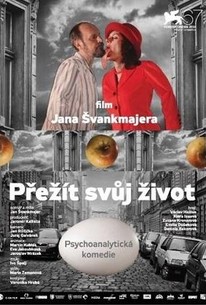 Eugene, an aging man, leads a double life: one real - the waking life he spends in the company of his wife of many years, Milana - and the other in his dreams, his sleeping hours being devoted to a recurring evolving dream of a beautiful young woman, Evgenia. Seeking to perpetuate his dream life, he goes to see a psychoanalyst, who attempts to provide an ongoing interpretation of his experiences. On the wall there are portraits of Freud and Jung, which become animated, alternately applauding, disapproving or fighting over her interpretations. The latest film from practising surrealist animator Jan vankmajer is a mix of cut-out animation from photographs and live action segments, combining real actors with their animated photographs, against black and white backdrops of photographed Czech buildings. This stylistic approach which, Svankmajer jokes during the films introduction, was due to lack of funds and saved on catering, provides freedom for imaginative collages, and humorous nods in the direction of some of surrealism's familiar practitioners (Dalí, Ernst, Buñuel). Drawn directly from vankmajer's own dreams, the film is a complex, multilayered story about aging, love, sex, childhood, trauma and dreams, steeped in Freudian and Jungian analysis and injected with a healthy dose of perversity. As Eugene labors in different versions of reality, vankmajer's own deeply curious take on reality manifests in all its surrealist splendor.

A hit-the-ground-dead Freudian romp about an office worker's dream life.

The film interestingly and subversively takes its stand on the idea that dreams are the real thing; waking life is an exotic, strange tissue of unreal diversions.

One of the most imaginative and visually arresting films of the year. Essential viewing.

It harnesses the skewed workings of the subconscious, confirming Svankmajer as a master filmmaker and knocking films like 'Inception' and 'The Matrix' into a cocked hat.

The Czech animation maestro's first feature for six years is a welcome, if sometimes slight, return. It's still 20 percent more weird and wonderful than your average dream-exploring, Freud-featuring cut-out animation.

Weird without being alienating, educated without being haughty and heartfelt without being (too) sentimental, "Surviving Life" is a psychoanalytically guided tour through the dreams of a distressed individual.

While the film may lack money, it's by no means short on imagination.

Peek into the subconscious imagery of Jan Svankmajer

The plot might have been better suited to a long-ish short, but Svankmajers outlandish imagination and visual metaphors conjure up an arresting animated universe in which dreams and reality co-exist.

The style is often close to vintage Terry Gilliam.

Eye-popping, disarming and playful, with a brisker pace than you might expect from this director.

There are no featured audience reviews yet. Click the link below to see what others say about Prezít svuj zivot (teorie a praxe) (Surviving Life (Theory and Practice))!