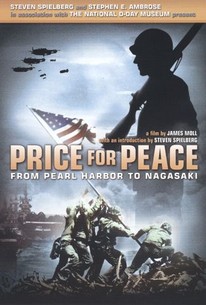 This riveting TV documentary was a joint effort between Hollywood superproducer Steven Spielberg, WWII historian Stephen E. Ambrose and director James Moll, the man responsible for the Oscar-winning Holocaust account Last Days. Concentrating on the final days of the War in the Pacific, from Iwo Jima to Hiroshima, Price for Peace offers reams of rare combat and mop-up footage (much of it in color), coupled with eyewitness interviews from both sides of the conflict. For every story provided by an American veteran of the war, there is an equally compelling story from a former member of the Japanese armed forces. Few of the battle and interview sequences have quite the emotional impact of those moments near the end of the film in which the former enemies tearfully embrace, offering mutual apologies, condolences and words of encouragement. Hosted by Tom Brokaw, Price for Peace made its first NBC network appearance on May 27, 2002.

Critic Reviews for Price for Peace

There are no critic reviews yet for Price for Peace. Keep checking Rotten Tomatoes for updates!

There are no featured reviews for Price for Peace at this time.