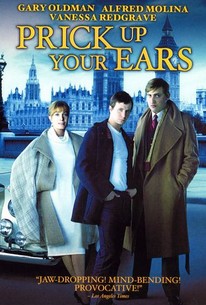 Prick Up Your Ears Photos

This unadorned biography of playwright Joe Orton (Gary Oldman) charts his bawdy, dangerous relationships. Alfred Molina plays Orton's brutish lover, Kenneth Halliwell, a pathetic figure who becomes horrific and then tragic before the film is over. The hilarity of scenes from such Orton plays as "Loot" and "What the Butler Saw" is evenly balanced by the bleakness of the playwright's tormented (and tormenting) off-stage existence, which ended suddenly at age 34 with half a dozen blows to the head from a hammer. Prick Up Your Ears is based on the book by theater critic John Lahr, who is played in the film by Wallace Shawn.

Jane Blackburn
as Woman in Gallery

Stella Richman
as Woman in Gallery

Neville Phillips
as Man in Gallery

Jonny Phillips
as Youth Outside Lavatory

Richard Ireson
as Man Outside Lavatory

News & Interviews for Prick Up Your Ears

View All Prick Up Your Ears News

Critic Reviews for Prick Up Your Ears

Molina is superb as Halliwell, managing to not only depict a man gradually unravelling from intelligent and dignified to frenzied and paranoid but to cast him in a sympathetic light.

Bennett and Frears, between them, have coaxed from Gary Oldman a performance which stunningly walks that tightrope between our fascination and our mistrust.

As a portrait of a relationship and a creative partnership, Prick is ever alert to the shifts in power, to the narcissistic wounds that can never be salved when a teacher is surpassed by his pupil.

A perfect storm of talent collides to create one of cinema's great doomed love dramas.

Gary Oldman's superb livewire performance is now virtually an authentic testament of the man himself.

Gary Oldman is excellent as Orton, right down to remarkable resemblance, while Alfred Molina creates both an amusing and tormented Halliwell. Vanessa Redgrave takes top honors, though, as a compassionate and benign agent.

What fascinated me about the film was its portrayal of the deep and unnerving intimacy between the men.

Alan Bennett's script is Ortonesque, but without the theatrical extravagance; it suits the cinema, in other words, and it is witty, acute and economical.

With Gary Oldman exuding plebeian charm and sharpness and looking amazingly like Orton in his photographs, the film is convincing and impossible to walk out from...

"Prick Up Your Ears" may shock less than viewers might expect given the gruesome facts of the story, but the film's extraordinary writing, directing, and acting still hold up 30 years later.

A brilliant and painfully raw portrait of a troubled, a tragic relationship.

Audience Reviews for Prick Up Your Ears

I felt the film could have explored more of the brief career of Joe Orton because the film tends to brush over those parts a bit. However the performances of Oldman and Molina are amazing. Its too bad the film was released in 1987, because if it was done now I think the content wouldn't have made people ignore it.

Good little film about the life of Joe Orton. Alfred Molina is great as his lover Kenneth Halliwell. Plus an excellent script by Alan Bennet.

[font=Century Gothic][color=darkred]"Revengers Tragedy" is a movie based on the 17th century play by Thomas Middleton. In this version, it is updated to Liverpool in the near future where Vendici(Christopher Eccleston) is returning after a period of absence. He is back to swear vengeance against The Duke(Derek Jacobi, who does not have a lot to do), after he killed Vendici's bride in retaliation for her not wanting to have sex with him.(A good deal of this movie is taken up with men defending the honor of women. I can understand this happening in the 17th century but it's not likely for the present or anytime in the near future.) Other faults include the movie missing chances to have anything to say about 1) the nature of revenge and 2) the class structure.(The Duke is evil but Lord Antonio seems like a pretty alright guy.) But it is imaginatively staged with computer effects and is well acted especially by Christopher Eccleston and Eddie Izzard.[/color][/font] [font=Century Gothic][color=#8b0000][/color][/font] [font=Century Gothic][color=darkslateblue]"Prick Up Your Ears" is based on the lives and tempestual relationship of playwright Joe Orton(Gary Oldman) and Kenneth Halliwell(Alfred Molina). Orton's role in life seemed to be wreaking playful havoc in the straitlaced society of 50's and 60's Britain, from defacing library books to anonymous sex in lavatories. The movie is witty and engaging. It gives great insight into the characters and their love for each other. Both Oldman and Molina do a great job. And it's a joy watching Wallace Shawn and Vanessa Redgrave act together.[/color][/font] [font=Century Gothic][color=darkslateblue][/color][/font] [font=Century Gothic][color=darkslateblue](Very strange literary note: Alfred Molina invokes T.S. Eliot in "Prick Up Your Ears." He would do so again in "Spider Man 2.") [/color][/font]

Prick Up Your Ears Quotes