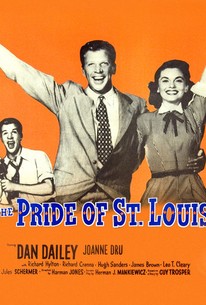 Pride of St. Louis is the story of one of baseball's most colorful characters, Jerome Herman "Dizzy" Dean. While playing amateur ball in 1928, Dizzy (Dan Dailey) is hired by the St. Louis Cardinals. He spends a year or so playing with the Cards' Texas farm team, during which time he woos and wins department-store clerk Pat Nash (Joanne Dru, who ironically was the real-life aunt of pro baseball player Pete LaCock!) Once in the majors as a pitcher, Dean is joined on the Cards lineup by his younger brother Paul (Richard Crenna), whom the press nicknames "Daffy." Through a combination of spectacular ballplaying and zany publicity stunts, Dizzy and Daffy become nationwide favorites. Their popularity really soars after they help the Cardinals win the 1934 World Series. After this triumph, things begin to go downhill for Dizzy, who endures several injuries and finally "loses" his pitching arm. Dean is rescued from a binge of self-pity by his old friend Johnny Kendall (Richard Hylton), whose dad is a brewery executive. Johnny convinces his dad to sponsor a series of St. Louis Browns radio broadcasts, and to hire Dizzy as a play-by-play announcer. Ol' Diz gets in a lot of trouble with local schoolteachers because of his eccentric grammar ("he slud into third base," etc.) but things eventually turn out A-OK. Pride of St. Louis takes any number of liberties with the facts, but the real Dizzy Dean didn't care so long as 20th Century-Fox ponied up a huge sum of money for the rights to his life story: "Jeez," he said at the time, "they're gonna give me 50,000 smackers just fer livin'!" Future NBC news commentator Chet Huntley shows up in one of the closing scenes as sportscaster Tom Weaver. ~ Hal Erickson, Rovi

Robert Nichols
as Eddie
View All

[An] ultra-civic-minded work manages to kill the idea of baseball as the national pastime.

The wacky career of baseball's Dizzy Dean - as pitcher, radio commentator, private citizen, and screwball - is engagingly corned up in this lively diamond comedy.

A potentially good film is trimmed down to a tolerable mediocre one, and Diz and the Cardinals deserve better.

There are no featured audience reviews yet. Click the link below to see what others say about Pride of St. Louis!