Pride of the Marines1945 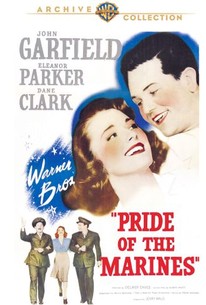 Pride of the Marines Photos

John Garfield stars as Al Schmid, a true-life marine who served in World War II. Schmid becomes a hero at Guadalcanal, defending a machine gun post and killing 200 Japanese before he is permanently blinded by a grenade. Despite being awarded the Navy Cross, Schmid returns home embittered by his disability. After a long and grueling convalescence, he is shaken back to life by his girl friend Ruth (Eleanor Parker) and his best pal (Dane Clark), neither of whom allow Al to wallow in self-pity. The pride in Pride of the Marines comes from Al Schmid's ultimate realization that his sacrifice was worthwhile, and that his sightlessness need not prevent him from leading a full and rewarding life.

Michael Browne
as Corpsman
View All

Critic Reviews for Pride of the Marines

Another enlistment poster, but fortunately lousy.

John Garfield gives a compelling performance in this WWII biopic about a soldier who lost his vision.

Audience Reviews for Pride of the Marines

There are no featured audience reviews yet. Click the link below to see what others say about Pride of the Marines!

Pride of the Marines Quotes