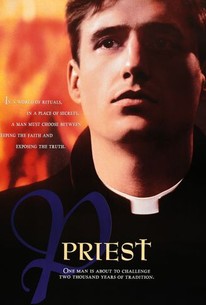 A priest is torn between church dogma and his personal beliefs in this British drama. Father Greg (Linus Roache) is a Catholic priest who tends to a parish in Liverpool. Like his superior, Father Matthew (Tom Wilkinson), Father Greg is not dealing well with his vow of celibacy. While Matthew has been discreetly having an affair with his housekeeper, Greg is homosexual, and he occasionally slips out to gay clubs for anonymous encounters with strangers. One night, Father Greg meets a man named Graham (Robert Carlyle) at the bar; when he bumps into him on the street a few days later, he realizes that he's falling in love with him. As Father Greg struggles with his sexual and spiritual identity, he hears a confession from 14-year-old Lisa Unsworth (Christine Tremarco), who tells him that her father has been molesting her. Mr. Unsworth (Robert Pugh) confirms his daughter's allegation during confession, and he tells the priest that he will not stop his incestuous behavior. Should Father Greg violate the seal of the confessional to save Lisa from further abuse? Priest, which opened in America on Good Friday, generated considerable controversy, both with Catholic organizations (who denounced the picture) and the MPAA (the film had to be re-edited to gain an R rating for U.S. release).

Guiseppe Murphy
as Man in Lift

Mandy Walsh
as Guest at Wake

Stephanie Roscoe
as Guest at Wake

Ann Haydn-Edwards
as Guest at Wake

Mike Haydn
as Guest at Wake

Rupert Pearson
as Man on Skateboard

Victoria Arnold
as Girl in Confessional

Ray Williams
as Boy with Stutter

Kevin Jones
as Boy at Beach

Priest shouldn't be missed -- much of it is strong and moving. My reservation is not that it bites off more than it can chew (these days, big teeth are welcome) but that there's something mechanical about its mastication.

The unexamined assumptions in the Priest screenplay are shallow and exploitative.

In her timely and audacious feature debut, Antonia Bird addresses such taboo issues as homosexuality and incest within the Catholic church.

A provocative film, with persuasive work by Roache.

This drama about Church hypocracy could stand to be far less preachy.

A star-making performance by Linus Roache.

The film's heart and message was in the right place.

Makes it clear that forgiveness is one of the most distinctive marks of Christianity and there is no future for any church that disregards it.

Antonia Bird's powerful, thought-provoking, and controversial British film, that examines the life of a young devout Catholic priest, father Greg Pikington, played by Linus Roache in a superlative lead performance, who struggles with his homosexuality and secret gay lover. His assignment to a working class parish forces him to face the contradictions in his life, after hearing the confession of a 14-year-old girl who is being sexually abused by her monstrous father, he begins questioning a God who allows evil to destroy the life of a child. The Priest is torn between the laws of the church and his need to help this innocent young victim. Fine direction by Antonia Bird, and a supporting cast that all deliver exceptional performances they include Tom Wikinson, Cathy Tyson, James Ellis, Robert Carlyle, John Bennett and Lesley Sharp. A passionate film with a extremely moving ending, It's message is about redemption and the power of forgiveness, told with delicacy and respect.This film was released in 1994 prior to the current pedophilia scandal that has shook the church to its foundations. Highly Recommended.

A well-meaning film that touches on too many issues to be effective. Sadly, this results in a degeneration into preachiness to make its points. A good performance by Roache and a somewhat better one by Wilkinson. Barely adequate production values.

Unreal at the time, Priest still remains a very powerful film about a homosexual who tries to hide behind the veils of the priesthood and finds his humanity something truly to be wrestled with. Gripping and great.

This reflects well, the loneliness of the calling