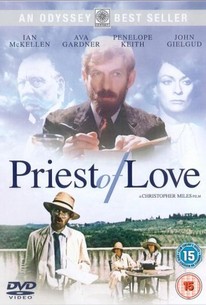 The later years of the life of author D.H. Lawrence are dramatized in this screen biography. Following the controversial reception of his novel The Rainbow, David Herbert Lawrence (Ian McKellen) and his wife Frieda (Janet Suzman) leave England for the U.S., where they hope that Lawrence's bold themes will be received in a more tolerant climate. Such is not the case, and the Lawrences travel first to Mexico, and then to Italy while David attempts to complete and then publish his best known (and most controversial) work, Lady Chatterley's Lover. However, as the furor over the book taxes David's well being, tuberculosis saps his physical health. The supporting cast includes John Gielgud as censorship crusader Herbert G. Muskett and Ava Gardner as Mabel Dodge Luhan. ~ Mark Deming, Rovi

Critic Reviews for Priest Of Love

That fine actor, lan McKellen, who bears a startling resemblence to Lawrence, is unable to make him attractive.

Priest of Love is at once an unusual love story and a riveting portrait of D.H. Lawrence.

There are no featured reviews for Priest Of Love at this time.