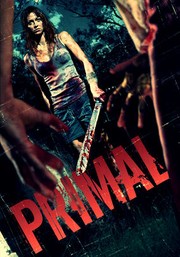 John T
½ January 2, 2016
Not a bad watch. This simple survival story has all the typical things you would expect with plenty of gore. Only gripe was some week CGI effects at end of film but that shouldn't stop you from watching it.

Stephen T
½ June 9, 2015
After watching this movie I can safely say that it is not worth you time and that there are many other movies out there that could satisfy your needs for some horror in your life. Bottom line don't watch this movie.
There will be some spoilers in the rest of this review so if you read on you have been warned.( However please save yourself the pain and don't watch this.)
This movie follows a group of "friends" that are on a camping trip to study some ancient cave paintings. They arrive at a cave where they enter and one of the girls has to get out and drive around the mountain that the cave cuts through. When they arrive two of the kids are in a relationship start having sex in a tent that they have just set up. This is happening when their other friends are siting outside the tent. It a strange scene. At some point they all go and look at the painting that they were here for. 4 of the 6 kids go back to there camp and the two that stay are attacked by a rabbit with crazy sharp teeth. After this they go back to the camp and eat. One of the girls deciding she wants to go swimming in the pond that she has no clue what is in it. As she gets out she screams because she has a bunch of leeches on her body. She then is exposed to this sickness and the confusion starts. That is the start of the movie. That is as far as i'll go with the review except I have to address the three parts/aspects of the movie I hated the most. The fist is a part at the beginning of the movie where they show a flashback of this sickness taking place before to another group of people. It is only shown for 15 seconds at most, but is never explained. Secondly the insane amount of stupidity in this group of people. Lastly is the ending because it involves a tentacle rape scene and an attempted tentacle rape scene and it is why I give the movie only a .5.
In conclusion don't watch this movie it is physically painful to watch.

Jack M
½ February 10, 2015
nothing revolutionary but has a great vibe to it

Adam S
March 20, 2014
"Primal" is an Australian outback horror film, and while it follows a few of the cliches of the genre, it is still a reasonably creepy film.

When a group of campers head to the outback, a couple get afflicted with a primal desire to kill and maim. The basic gist is exactly as anyone who has seen a horror movie will think, except for one extremely weird scene at the end that I won't spoil, but doesn't really fit with the rest of the narrative.

Still, for an Aussie spook movie, it isn't bad.

Sgt. C
March 12, 2014
(38%)
By-the-numbers gore horror with nothing new to add at all. There is much worse low-budget horror out there, but there is also much better.

Super Reviewer
Cynthia S
½ March 1, 2014
A good time had by all!!! I have to say that I didn't hate it. I watched it all, and found the creatures mighty interesting...Not a great movie, but entertaining enough for me, I guess.

Guido S
February 25, 2014
A few friends go camping in the woods and eventually go skinny dipping. One becomes crazy and Primal and starts coming after them like a rabid dog. They eventually find cave paintings which lead to a curse. This movie was pretty dumb. Never cared about anyone and the story wasn't that interesting.

Don S
February 23, 2014
A low-budget Australian horror movie that spent a fair amount of that budget on blood and gore. The acting is on the poorer side and the movie quickly abandons the fact that these were intelligent people looking to see and understand rock paintings and devolves the characters into your average dumb-ass horror movie foils who can't think for themselves.

Jason K
February 22, 2014
Not the widest gamut of screenwriting, but saved with cinematography and cutting the fat out in direction.

Anja, Krew, Lindsay, Kris, and Warren take a trip to the outback led by Dace. They are looking for cave paintings that have not been spotted for 120 years. Anja has some drawings left to her by an uncle from the 19th century. The group finds the site with little incident.

Anja clearly has trepidation about when she reaches the opening of the cave. She has something akin to a panic attack and passes out after cutting herself by incidental contact with the rocks. Unfortunately, the blood of her family has been shed, which goes into the ground and the nearby water. This dooms the party...or does it? That is what the rest of this short film is about.

They get about viewing the rock paintings, taking notes, and shooting photographs. The local fauna (mosquitoes, rabbit) seem to find them tasty. The dead rabbit had some fierce looking teeth, which should have been a clue. Mel's skinny-dipping had some bad side effects. When she came out, there were leeches all over her; that evening she gets a fever and her teeth start falling out.

They try leaving, but the local wildlife have somehow disabled their SUV. By the next morning, Mel's teeth and personality have been replaced. She starts biting, which makes matters worse.

Will anyone get out alive? If so, will they be regular humans?

------Scores------
Cinematography: 7/10 Fine for the most part, except for interludes of very jerky camera motions.

Sound: 7/10 The actors were adequately miked. The incidental music did not add much to the film.

Acting: 2/10 Wil Traval was OK, The rest of the actors I could have done without.

Screenplay: 4/10 This was a 15 minute story stretched to 84. The monster-human interludes were frequently boring and always unbelievable.

SFX: 4/10 Those monster teeth look like they could never work at all.

Cody W
½ January 24, 2014
Was okay for a horror movie but I thought there could have been a lot more to it. I did like that the reason for going to this place was something different not the normal camping trip. The rabbit was my favorite part because it's creepy and really does kind of make you wonder what else is going on. I think there should have been more action. It would get scary then out of nowhere is would be calm. It drove me crazy. I can't it's a must see movie but if you are into people turning into animals you might enjoy this one.

Ashley K
January 3, 2014
At first I thought this was going to be a total rip-off of The Descent. Turned out to be better than I expected, but as is the bane of many horror movies, the ending was lacking.

WS W
½ November 25, 2013
Same slash thing. But Australians deliver something feeling way much solid in this one than those mass production in Hollywood.

Nicola W
November 20, 2013
Ok so this is the usual where a group goes camping film. However it was more comical than scary. it was not really that bad until the ending. the ending was just stupid and spoilt the film.

Hugo G
September 28, 2013
Bad visual effects, horrible characters and a story that didn't make sense. It was terrible, it seemed more like a joke, than an actual horror movie. Aside from a few good gory scenes, it was extremely disappointing, unoriginal and badly executed. Even the editing was bad. And the ending was the worst thing of the movie, not only was extremely disturbing but it wasn't satisfactory nor good.

Karsh D
September 12, 2013
Aussie kids get stuck in the middle of water and a couple of them turn into zombies and start attacking the rest of the group. Gore count good.